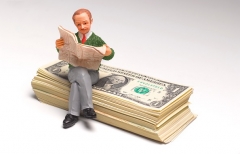 (CNSNews.com) – Democrats need to rethink their plan to tax billionaires on their unrealized capital gains, which will discourage investment in the U.S. economy, Sen. Mitt Romney (R-Utah) told Fox News on Monday. “I think it’s a big mistake,” he said.

“Well, first of all, it’s not a good idea to tell billionaires, don’t come to America, don’t start your business here, to tell the Steve Jobs and the Bill Gates and people like that, this isn’t the place to begin your business, go somewhere else. That’s a bad idea,” Romney said:

But, number two, you’re going to tax people, not when they sell something, but just when they own it and the value goes up. And what that means is that people are, these multi-billionaires, are going to look and say, I don’t want to invest in the stock market, because, as that goes up, I’m going to get taxed.

So maybe I will instead invest in a ranch or in paintings or things that don’t build jobs and create a stronger economy. That kind of distortion of our economic system is a bad idea for the entire country, because, frankly, we depend upon people of means to invest in enterprises, to invest in the stock market.

That’s one of the reasons the stock market keeps going up, which is good for all of us. The idea that somehow there’s somebody out there that’s going to give us stuff for free, it’s just not going to work.

Many people, not just billionaires, build wealth through capital gains — investments that are taxed only when the asset is sold. Democrats want to tax those assets as they appreciate, before the investor actually realizes any gain.

Democrats say the so-called “wealth tax” would apply only to billionaires, but as Romney and others have noted, taxes applied initially to the wealthy have a way of trickling down to many more taxpayers:

Well, that’s, of course, one concern, which is not only will you convince billionaires not to invest as much as they have in the past in starting businesses or starting investments in the stock market, but, instead, you will have more and more people that get hit with a tax,” Romney said.

The idea of taxing people as the value of something goes up, not when they sell it, but just when the value goes up, that’s a pretty dramatic change. And the unintended consequences from that kind of change, I don’t know if the Democrats have thought through.

And whether it applies to 700 billionaires or 700,000 Americans ultimately, the idea of taxing people based on the value of something going up suggests values will keep going up. What happens when they go down? Are they going to get a refund check? Are they going to get paid interest for not having had the benefit of their money during the time when they were taxed when it went up before there?

There’s so many problems with a dramatically new tax scheme that I don’t think the Democrats have thought through. I think it’s a big mistake. I know a lot of people recognize that, with nature, everything is connected and that, if you change some portion of our natural system, why, it could have an impact throughout our natural environment.

Well, the same is true in the economy. When you change dramatically an aspect of how we tax people, you can expect a lot of unintended consequences. And this new tax idea is not a great idea, in my opinion.

Not only is the new tax scheme “a big mistake,” in Romney’s opinion, so is the way Democrats want to spend taxpayer money:

“Look, they’re adding to inflation,” he said. “And instead of dealing with something like the emergence of China as a global competitor, we’re going to be giving out two years of free pre-K. This is not the answer to the problems America faces right now.

“So it’s raising taxes at a time we shouldn’t. And it’s also encouraging more inflation. And it’s not addressing the real problems that our country faces and that the American people are concerned about.”

Romney said he thinks Democrats are “pretty desperate” to pass some kind of infrastructure package:  “So I think you’re going to see legislation passed. But the real problem is, the legislation is not popular with the American people, and it doesn’t address the concerns people have.

As Democrats propose spending trillions of dollars on top of the trillions already appropriated, Romney said he hopes the American people understand “how much a trillion is.”

“So, a trillion is an enormous amount of money. And the Democrats, I think, are adding fuel to a fire, creating more inflation, and it’s hurting the American people.”