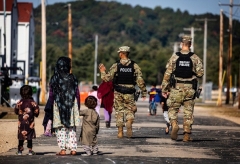 U.S. Military Police tend to Afghan refugees at the Ft. McCoy Army base in Wisconsin on September 30, 2021. (Photo by BARBARA DAVIDSON/POOL/AFP via Getty Images)

(CNSNews.com) – Time and resources devoted to the care of some 57,000 Afghan refugees here and abroad is time and resources not spent on other U.S. military missions, Defense Department spokesman John Kirby told a news conference on Monday.

“And so, we’re watching that very closely. But the secretary (Defense Secretary Lloyd Austin) is not at a point now where he would say that our readiness to defend this country is being adversely affected.”

Kirby told reporters that the U.S. military is currently housing 53,157 Afghans at eight bases in this country; “just over 3,000” more in the Central Command area (Middle East/Asia); and 463 in the European Command.

A reporter asked if the expense of housing those refugees “could affect other military operations.”

And we’re very proud of the role that we’re playing and of the terrific job, the compassion that our men and women are showing every day, not just here at home, but overseas and in making sure that these evacuees have a safe and secure environment to live and to work on their process of — towards citizenship.

But obviously, we also have a commensurate responsibility to defend this country. And one of the things that we’re constantly reviewing is the degree to which our readiness to do that is being affected by this fairly sizable mission set. And we don’t believe now that, at this time, that our readiness to defend the nation is being adversely affected.

But clearly, there are assets, resources, time that is — that are being devoted to this that are, in some cases, not being devoted to other things. And so, we’re watching that very closely. But the secretary is not at a point now where he would say that our readiness to defend this country is being adversely affected.

Kirby said he’s not aware of any budget request to cover the cost of the Defense Department’s Afghan refugee mission.

“As you know, we are doing this on a reimbursable basis, so — but that hasn’t been worked out. And then we’re working closely with nonprofit organizations, humanitarian organizations, I should say, the Department of Homeland Security and the State Department are, in terms of how they are resettled.

“And that’s not a departmental responsibility here at the Pentagon. That said, a lot of local aid organizations, and frankly, just citizens that live outside these facilities, these eight bases, are donating all kinds of things, largely clothing and toys for kids. So, there’s been an outpouring throughout the country, particularly in these communities outside these bases, of support for these people,” Kirby said.

In response to another question — whether Congress should appropriate money for the Defense Department’s resettlement mission — Kirby said, “I don’t think we’re at that stage right now, Travis, to have all that detail worked out.”