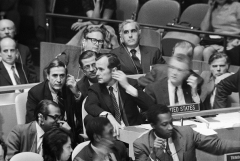 (CNSNews.com) – As Beijing’s communist government on Monday celebrated the 50th anniversary of the vote that handed it the “China” seat at the United Nations, its mood was soured by a U.S.-led push in favor of meaningful Taiwanese participation at U.N. forums.

A senior State Department official in recent days accused China of misusing the October 25, 1971 General Assembly resolution 2758 to deprive Taiwan of the opportunity to take part in multilateral organizations.

“We have been actively encouraging member-states, civil society and individuals who care about the problem in supporting Taiwan’s robust, meaningful participation throughout the U.N. system,” said U.S. Deputy Assistant Secretary of State for China, Taiwan and Mongolia, Rick Waters.

“This is a serious political provocation to China and a malign distortion of international law and universally recognized norms governing international relations,” the Chinese Embassy in Washington said in response to Waters’ remarks.

The crux of the dispute is the distinction between Beijing’s “one China principle” and the United States’ “one China policy.”

The People’s Republic of China (PRC) views Taiwan as falling under its sovereignty and has vowed to “reincorporate” it, by force if necessary.

The carefully-crafted U.S. policy, by contrast, acknowledges that China has its particular stance, but does not itself take a position on Taiwan’s sovereignty. The U.S. policy seeks a peaceful resolution of the dispute on the two sides of the Taiwan Strait, in line with the free choice of the Taiwanese people.

But Beijing doesn’t accept that.

“The vast number of U.N. member states, including the U.S., recognize that there is only one China in the world and Taiwan is an inalienable part of China’s territory,” foreign ministry spokesman Wang Wenbin declared on Monday.

That statement is untrue: U.S. government policy does not recognize that “Taiwan is an inalienable part of China’s territory.”

The outcome of the Chinese civil war saw Mao Zedong’s victorious communists declare the PRC in 1949 while Chiang Kai-shek’s defeated nationalists moved their government to the island of Taiwan.

The Taiwan-based nationalists retained the “China” seat at the U.N. until Oct. 25, 1971, when the General Assembly voted 76-35 to hand the seat to the PRC – and to expel what resolution 2758 called “the representatives of Chiang Kai-shek.”

“I hope the U.N. will not relive this moment of infamy,” U.S. ambassador George H.W. Bush said after the vote.

The TRA committed the U.S. to provide the island with military aid and declared that the U.S. would “consider any effort to determine the future of Taiwan by other than peaceful means, including by boycotts or embargoes, a threat to the peace and security of the Western Pacific area and of grave concern to the United States.”

Over the decades since Taiwan has become a thriving democracy, with all the trappings of a sovereign state. But its 24 million people have no representation in the international community, as Beijing works persistently to prevent its participation in U.N. and other global bodies, from the World Health Organization (WHO) to Interpol.

‘Root out these lies’

“For 50 years, the CCP has distorted resolution 2758 to discriminate against Taiwan at the U.N. as part of its larger plan to dismantle Taiwan’s democracy and annex the island,” Rep. Michael McCaul (R-Texas), ranking Republican on the House Foreign Affairs Committee, said on Monday.

“Resolution 2758 does not say Taiwan is a part of China,” he said. “It does not say China may represent Taiwan before the U.N. It does not address Taiwan’s sovereignty – it doesn’t even include the word Taiwan.”

The resolution handing the ‘China’ seat at the UN to the PRC was passed 50 years ago this week. (Photo: CNSNews.com)

McCaul urged democratic governments “to collectively reject the CCP’s false claims about this document and to root out these lies that the CCP has embedded throughout the U.N. bureaucracy.”

At an event on Thursday marking the 50th anniversary of resolution 2758, Waters confronted the issue.

“The People’s Republic of China has misused resolution 2758 to prevent Taiwan’s meaningful participation, and it doing so I think our view is that Beijing is denying the international community the ability to gain the valuable contributions that Taiwan offers,” he told the German Marshall Fund-hosted discussion.

Waters offered as examples the fact Taiwan is barred from taking part in key gatherings of the WHO and the International Civil Aviation Organization.

China has moreover used its position on the U.N. committee that authorizes non-governmental organizations to “block the accreditation of any group that does not refer to Taiwan in the way that Beijing favors.”

As an example, Waters said the NGO Committee had earlier this year withheld permission for a high school in Colorado to attend a U.N. meeting until the school amended a year-old post on its website that included a reference to Taiwan in a group of countries. (China insisted that the words “province of China” be inserted.)

“This really, I think, starkly illustrates that point of the misuse of [resolution] 2758.”

At the weekend, Waters took part in a virtual forum with State Department and Taiwanese foreign ministry officials on expanding Taiwan’s participation at the U.N. and in other international forums.

“The Taiwan authorities’ attempt to expand the so-called international space by brown-nosing foreign forces is in essence trying to expand the room for ‘Taiwan independence’ and separatism and will only prove a failure,” he said.

In a speech marking the occasion on Monday, Chinese President Xi Jinping called the passage of resolution 2758 “a momentous event for the world and the United Nations.”

“It came as the result of joint efforts of all peace-loving countries that stood up for justice in the world,” he said.