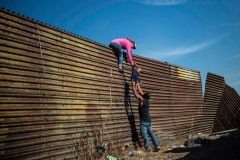 A group of Central American migrants climb the border fence between Mexico and the United States, near El Chaparral border crossing, in Tijuana, Baja California State, Mexico, on November 25, 2018. (Photo by PEDRO PARDO/AFP via Getty Images)

(CNSNews.com) – The White House said Wednesday that despite the record number of migrants crossing the border last month, almost half of that number were removed from the U.S.

As CNSNews.com reported, there were 210,000 “encounters” with migrants along the southwest border in July, the highest monthly figure in two decades.

We have increased our investment in areas like the Central American Minors program, allowing people to apply from within country so they are not making that dangerous trip. There’s more that needs to be done.

We’ve also instituted a number of additional steps recently, including expedited removals to move people out of the country more quickly, but it’s– we’re still at work on improving a proc — improving a system that was very broken when we took office.

DOOCY: So the message to migrants is the same even though they are coming at a 21-year high, 210,000 encounters at the border last month.

PSAKI: And I would also note the number of people who were removed from the border, which is an important part of the context, which was almost half of that number.

PSAKI: Well there are a number of factors as you well know that are happening in these countries, and we’re working to address those as well, and the vice president is leading those efforts. We don’t expect that to be a switch, but addressing root causes in these countries – corruption, economic downturn. People are fleeing a range of challenges, of persecution. Those are issues we need to address at the same time.