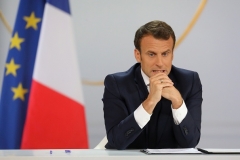 Paris (CNSNews.com) – A series of social media posts by French President Emmanuel Macron designed to answer young people’s questions about COVID-19 vaccines have stoked debate here – along with some ridicule.

On Monday and Tuesday, Macron posted four videos on Instagram and Tik Tok, discussing vaccines and in later clips answering questions submitted by users of the platforms.

He described vaccination as “the only weapon in the face of the fourth wave of COVID-19,” saying that around 42 million people in France have received one shot and more than 35 million have received two.

“I posted this video to counter false rumors circulating on social networks,” he said.

Macron said it was important that young people were vaccinated, “to avoid infecting others and their families.”

He said he had reviewed the effectiveness of vaccines licensed by independent authorities around the world. “The analyses that have been done show that 85 percent of people who are hospitalized are not vaccinated,” he said. “The vaccine saves lives, the virus kills. It’s simple.”

In an apparent attempt to appeal to the young, the 43-year-old president filmed himself in a selfie mode, wearing a black T-shirt sporting a logo of a stylized owl. Behind him was a wall with red, white and blue stripes, the colors of the national flag.

The initial video, viewed more than three million times, raised a lot of discussion and debate, ranging from Macron’s competence to talk about vaccines to his choice of dress.

“Macron is not the best person to teach people,” Amélie Lebreton, co-founder of the communication agency Coriolink, told BFM TV.

She noted that during weekend protests against government pandemic measures, many had called on Macron to resign.

“Therefore it is not from him that they expect pedagogy.”

Some doctors pointed out that Macron was not an epidemiologist, and was not providing clearer explanations of the vaccine strategy than a government scientific body could.

Others disagreed. “If the president manages to do what we doctors have not been able to do with strict medical communication, well that’s perfect,” Dr. Edouard Obadia, who practices in a Paris suburb, told the channel.

“That T-shirt does not make a virologist,” he said in a television interview. “His T-shirt will not make him more accessible, younger or more convincing.”

“Do we have a president of the Republic or a lab salesperson?” National Rally lawmaker Gilbert Collard asked in a tweet, while Florian Philippot, a right-wing critic of what he calls “coronafolie” (coronavirus madness) commented, “A president turned influencer, in a T-shirt, who plays a salesman vaccine for Pfizer. Can we sink any lower?”

Among questions put to Macron, some asked about the point of being vaccinated when some regions have returned to mandatory mask wear outdoors.

Others voiced doubts about the safety of the vaccines, asking Macron to tell the nation what the drug really contained, and whether it would shorten lifespans.

Many comments focused on the T-shirt, with some wondering if there was some deeper significance to the owl logo.

Sources in the presidency said Macron was using the outreach not just to address the vaccine issue but also as an opportunity to counter opponents of the government’s controversial “health pass.”

With effect from August 9, people will be required to show the pass, which provides proof that the holder has been vaccinated against or has tested negative for COVID-19, before entering public places like theaters and restaurants.

Since the government announced the measure in mid-July, protests have been held every weekend. This past weekend, a total of 200,000 people demonstrated in 150 towns and cities, according to the interior ministry.

The health ministry said this week 7,840 COVID-19 patients were hospitalized, 761 more than a week earlier. Of those, 1,232 were in intensive care.