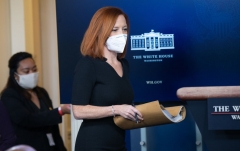 Psaki replied saying families and single adults are expelled if possible after being apprehended at the border, and migrants are given masks when they are taken into custody and must keep it on at all times.

“And about public health at the border, is the president concerned that migrants who are coming in, in great numbers, are not being tested for COVID at their first point of contact with Border Patrol?” Doocy asked.

“Well, let me give you a little bit of an understanding of what actually happens when people come across the border. First, as — to Katie’s earlier question, there’s been no change in Title 42, so families and single adults are expelled, if possible, when apprehended at the southern border. That’s step one,” the press secretary said.

“Those who can’t be expelled are often placed — and this, I think, goes to your question — in alternatives to detention programs while their cases are being reviewed. CBP provides migrants with PPE from the moment they are taken into custody, and migrants are required to keep masks on at all times, including when they are transferred or in the process of being released,” Psaki said.

“Our other protocol is if anyone exhibits signs of illness in CBP custody, they’re referred to local health systems for appropriate testing, diagnosis, isolation, and treatment. That is our process,” she said.