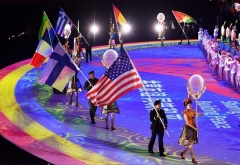 (CNSNews.com) – Officials in Beijing have long pointed to reports of COVID-19 cases detected outside of China before the known Wuhan outbreak to back their claim that the pandemic did not originate in that Chinese city.

But Republicans on the House Foreign Affairs Committee released information on Monday squarely challenging that reasoning.

Citing reports of illness among some athletes who competed in the Military World Games in Wuhan in October 2019, the report said participants infected in Wuhan and then taking the SARS-CoV-2 coronavirus back to their home countries could explain why some cases were detected outside China before the Wuhan outbreak erupted at the end of that year.

The Military World Games, the GOP report said, could thus have become “one of the earliest super spreader events in the world.”

The report is an addendum to an interim one, compiled by the committee’s minority staff and release by ranking member Rep. Michael McCaul (R-Texas) last September.

More than 9,300 athletes from a total of 109 countries – including the United States – took part in the Military World Games (MWGs), which opened on Oct. 18, 2019. Twenty-five of the participating countries sent delegations of more than 100 athletes each.

Athletes from several countries reported getting sick, both in Wuhan and after returning home. The report cites other reports to that effect from Canada, which sent a delegation of around 180 athletes and support personnel, and from several European countries.

Athletes also reported that Wuhan, a city of 11 million people, had been eerily quiet during the games.

According to the GOP report, at least four countries that sent athletes to the MWGs – Italy, Brazil, Sweden and France – later reported COVID-19 cases within their borders in November or December of 2019.

It noted that “athletes from France, Italy, and Sweden also complained of illnesses with symptoms similar to COVID-19 while at the MWGs in Wuhan. The presence of SARS-CoV-2 in four countries, on two separate continents, suggests a common source.”

“If, as presumed, SARS-CoV-2 first infected humans in Wuhan before spreading to the rest of the world, the 2019 Military World Games in Wuhan appears to be a key vector in the global spread – it other words, potentially one of the first ‘super spreader’ events.”

(According to the World Health Organization’s timeline of events, WHO picked up a media statement about cases of “viral pneumonia of unknown cause” on the website of the Wuhan health authority on Dec. 31, 2019. On Jan. 1, 2020 it requested information from the Chinese authorities, who provided information to WHO two days later.)

A hypothesis that the coronavirus may have leaked from the Wuhan Institute of Virology (WIV) lab into the Wuhan community before infecting visiting military athletes who took it back to their home countries, is essentially a reversal of a theory promoted by China’s foreign ministry on social media as early as March 2020: U.S. military personnel were infected with the virus through an accidental leak at a U.S. Army biolab at Fort Detrick, Md., then carried the virus with them to the Wuhan games.

“In October 2019, the U.S. sent more than 300 people to Wuhan for the Games,” he said during a press briefing. “Was there anyone with symptoms similar to those of COVID-19? What illness did those reported military athletes have exactly? The cases should be made public as soon as possible.”

The Chinese government is refusing to cooperate with the second phase of a WHO investigation into the origins of the coronavirus, which plans among things to further probe laboratories in Wuhan.

It argues that it did so fully during the first phase, which ended with a WHO-convened team of experts concluding that the so-called lab-leak hypothesis was “extremely unlikely” and not worth pursuing further.

The U.S. intelligence community is expected to report to President Biden this month on its investigations into the origins of the pandemic, including the possibility of a lab accident. 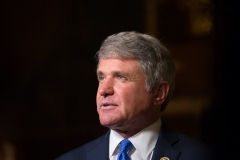 “As we continue to investigate the origins of the COVID-19 pandemic, I believe it’s time to completely dismiss the wet market as the source of the outbreak,” McCaul said on Monday. “Instead, as this report lays out, a preponderance of the evidence proves that all roads lead to the WIV.”

A major focus of the GOP report is the “gain-of-function” research into coronaviruses carried out at the WIV. Gain-of-function research is designed to increase the infectiousness or virulence of a pathogen, as a way to boost pandemic preparedness.

The report also examines signs that authorities tried to cover up the outbreak, including what it called “efforts to obfuscate, hide, and destroy evidence.”

“While much of the public debate was initially focused on the Huanan seafood market in Wuhan as the origin of the pandemic, the preponderance of evidence now suggests that the virus leaked from the Wuhan Institute of Virology,” it said.

“Given the WIV’s demonstrated history of conducting gain-of-function experiments on coronaviruses, including genetically manipulating viruses specifically to make them infectious to humans in BSL-2 labs, as well as their possession of one of the world’s largest collections of coronaviruses, it is completely plausible that one or more researcher(s) was accidentally infected and carried the virus out of the lab,” the report said.

“The evidence outlined above, combined [with] the cover-up conducted CCP authorities, strongly suggest the Wuhan Institute of Virology as the source of the current pandemic.”

CNSNews.com reported as early as February 19 last year on simmering questions surrounding the WIV, a specialist lab for investigating pathogens including bat coronaviruses.