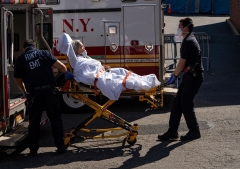 A COVID patient heads to the emergency room at a Queens, N.Y. hospital. (Photo by Robert Nickelsberg/Getty Images)

(CNSNews.com) – No vaccine is 100 percent effective, so breakthrough infections will happen, as fully vaccinated Sen. Lindsey Graham has learned.

Graham says he was diagnosed with COVID on Sunday, after experiencing “mild” flu-like symptoms Saturday night. He said his symptoms would be “far worse” if he hadn’t been vaccinated.

That holds true for most vaccinated Americans, Dr. Anthony Fauci told a White House COVID briefing on Monday: Since no vaccine is 100 percent effective, “you can expect breakthrough infections,” but don’t let the “total, absolute” number fool you:

“An important point to bring up is that the greater percentage of people that are vaccinated, even with a high degree of protection, the absolute number of breakthrough infections might appear high. That’s not the critical number.

“The critical number is what is the proportion of the vaccinated people who in fact are getting breakthrough infections, and that’s the critical one.”

Fauci said people infected with the alpha variant, for instance, are “pretty well protected for a reasonable period of time from reinfection” with that particular variant. “It isn’t perfect, but it’s good protection,” he said:

The situation changes when you’re dealing with the evolution of a new variant such as the delta variant. And what we are seeing right now, that there are reinfections. The protection you get from the original infection still exists somewhat, but reinfections occur at a much greater rate among individuals now than they did against the original alpha.

So, bottom line is, when you’re dealing with a variant, you don’t get the kind of protection that you would have hoped to have gotten from a previous infection.

And that’s the reason why the recommendation still holds, that even though you’ve been infected previously in the context of variants, it’s a good idea to get vaccinated anyway.