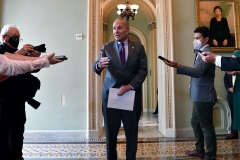 (CNSNews.com) – Working through the weekend, the U.S. Senate has produced a $1.2-trillion, 2,702-page, bipartisan infrastructure bill that now moves to the floor for amendment and debate.

Sen. Joe Manchin (D-W.Va.) told CNN’s “State of the Union” on Sunday he “absolutely” believes the bipartisan bill will pass. And unlike most of his Democrat colleagues, Manchin said the bipartisan bill should be viewed “on its own merits,” instead of being tied to a much larger, $3.5 trillion “human” infrastructure bill that only Democrats support.

Asked if he can “guarantee” that the Democrat-only reconciliation package will pass the Senate, Manchin said no:

I can’t really guarantee anybody. And I have not guaranteed anybody on any of these pieces of legislation.

Would we like to do more? Yes, you can do what you can pay for. This is paid for — our (bipartisan) infrastructure bill is all paid for. We don’t have a debt, that we’re going to incur more debt and throwing onto it.

And on the other, as far as reconciliation goes, it should be looked at the same. That’s why I said we’re going to get the budget resolution. Let’s start the process and then see where it goes.

On that, we should just work in good faith and be honest with each other, so no one’s misled any way, shape or form, and there should be no quid pro quo — you do this, I will do this.

When it comes to big legislation, does it help the American people? How do you tell over 80 percent of people, Democrats and Republicans, that we can’t do an infrastructure bill, a traditional infrastructure? There’s a lot of need out there for the human infrastructure, I understand.

But some of these programs that they are going to be putting in place could be in perpetuity, and even though it only has a 10-year run on it. So it’s being scored at 10 years at $3.5 (trillion). It might have perpetuity, would be $5 trillion or more. So we have to look at everything and be honest with ourselves.

Manchin said he’s concerned about how the $3.5 trillion bill would boost the national debt:

“Someone should be concerned about getting your financial house in order. So I’m worried about that. I’m worried about inflation. But, with that, we’re going to pay for it. So, let’s see what the pay-fors — if they’re real. Let’s see if the tax adjustments we’re going to make — I didn’t vote for the 2017 (tax cuts). I thought it was weighted to the wrong side.

“So, if we make some adjustments, do we — are we going to go overboard and make ourselves noncompetitive? I wouldn’t be for that,” Manchin said.

“Is that how you view it?” Tapper asked Manchin.

“I never did view it that way,” Manchin said.

I respect Senator Warren and everybody else who has a different perspective of this. The bottom line is that, for the last three decades, we have been trying to, previous administrations have been trying to do a large infrastructure bill.

When you talk about roads and bridges and rails and train and everything that goes with it, and Internet services, it’s something that every state, every area of every state needs. So, this is something you should be getting 80 or 90 votes on.