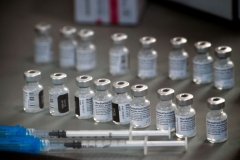 Syringes wand vials of the Pfizer-BioNTech Covid-19 vaccine are prepared to be administered to front-line health care workers under an emergency use authorization at a drive up vaccination site from Renown Health in Reno, Nevada on December 17, 2020. (Photo by PATRICK T. FALLON/AFP via Getty Images)

(CNSNews.com) – Former FDA Commissioner Scott Gottlieb told CBS’s “Face the Nation” on Sunday that the premise remains in tact that only a small percentage of those who are vaccinated are becoming infected with COVID-19 and spreading it to others, even with the Delta variant.

“We know that there is more people with this Delta variant who’ve been vaccinated who are probably spreading the infection, but it’s still a very small percentage of people who are becoming infected after vaccination and who then are going on to spread the infection to others,” he said.

“Remember, the original premise behind these vaccines were that they would substantially reduce the risk of death and severe disease and hospitalization, and that was the data that came out of the initial clinical trials. That premise is still fully intact,” Gottlieb said.

“And, therefore, they would be an important public health tool in effectively ending the epidemic, the pandemic, because they would prevent people from transmitting the virus. That premise is still intact, but what we see with the Delta variant is it’s diminished,” he said.

“There is more evidence that people are likely to spread the Delta variant even after vaccination than they were likely to spread the other variants, but it’s still a very small percentage of people, but we need to recognize, especially for vaccinated people who might be in contact with young children, with elderly individuals who are at risk, that there is a risk that they could develop a mild or asymptomatic infection and go on to spread it to others,” Gottlieb said.

CBS host John Dickerson said, “So Doctor Fauci said that they found in this Provincetown study that the amount of virus in the nasopharynx was the same as somebody who had not been vaccinated.”

“So help me understand, that seems like if you have– if there’s a breakthrough case, then you’ve got the ability to spread if it’s in the nasopharynx, but then what Doctor Alroy-Preis was saying was a– that it seemed like a much smaller group of people in the breakthrough category that could pass it on. So help me understand maybe the disconnect between those two,” he said.

“Right, the CDC is inferring from this study that there’s a risk of transmission in vaccinated individuals and, effectively, what they saw was what Doctor Fauci said. High levels of the virus in the nasopharynx of individuals who were vaccinated and became subsequently infected on par with the level of virus that you would see in someone who wasn’t vaccinated, but we know two things,” Gottlieb said.

“You really want to measure virus levels in the lower airways because that’s where aerosols are created, and we know that you spread this virus through aerosols,” he said.

“So maybe after a day or two days or three days, they’re much less likely to spread the virus than someone who remains unvaccinated,” the former commissioner said.

“So, initially, someone who’s vaccinated may– may have the same level to spread the virus, may be on par with someone who’s unvaccinated, but their ability to spread the virus probably diminishes more quickly, and, therefore, out in the community, if you were measuring their ability to transmit the virus, you would probably see on the whole, they’re less likely to be contagious,” he added.