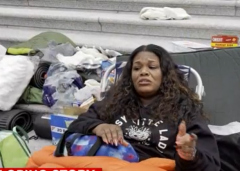 Rep. Cori Bush (D-Mo.) is sleeping on the Capitol steps to protest the end of the COVID-related eviction moratorium. (Photo: Screen shot from CNN)

(CNSNews.com) – The eviction moratorium imposed by CDC Director Dr. Rochelle Walensky during the COVID pandemic expired on Saturday, leaving some frantic renters with no recourse other than the states, which have received billions of dollars to help them — but aren’t doing so.

“The real issue here is how to get money out to renters who, through no fault of their own, are behind on their rent and to help landlords keep those renters in their home, which is a win-win,” Brian Deese, the chairman of President Biden’s National Economic Council, told “Fox News Sunday.”

Rep. Cori Bush (D-Mo.), an advocate for the homeless, told MSNBC on Monday, “There’s over $40 billion that is just sitting, waiting for people to use it. People who have the need right now, who have had this need for a year or more, or at least a few months. We have to get that money out to the people.”

Bush has been sleeping in a chair on the steps of the Capitol in recent days to draw attention to the plight of cash-strapped renters who are on the verge of eviction.

Deese said some places — he mentioned Louisville, Kentucky and Harris County, Texas — are getting money out to renters who eviction protection.

“And at the federal government level, we’re going to continue to do what we can. Now that that money is with the states and the locals, we’re going to provide technical assistance. And we can extend eviction moratorium for properties that are backed by government guarantees,” Deese said.

“So that’s for HUD and USDA and the VA. But the key message here is that no landlord should evict without seeking that rental assistance and states and localities need to get that money out urgently. And they can — they can do that.”

Host Dana Perino asked Deese, “Are you confident that the states are going to be able to get out this money without causing a complete uproar for the administration?”

“Well, we’re not going to rest until that money gets out and is flowing effectively,” Deese said:

The states and localities need to take those steps, and we’re going to do what we can at the federal level to support them.

But I would just underscore that this is really a win-win. A lot of these landlords are mom-and-pop landlords. They don’t benefit if they have to evict tenants. And the individuals here that are affected, you know, face a devastating choice between having to pay rent or put food on the table.

But those resources are there. They’re there and we can get this done. We just need the states and localities to move quickly and effectively. And the federal government, we’re going to continue to do everything that we can to help support that effort.

Deese said President Biden supports another extension of the eviction moratorium, but Biden says Congress needs to do that with legislation.

Rep. Bush is pushing for an executive order to extend the moratorium: “I believe that we should have orders that come down from the White House and the CDC — to go ahead and pen the executive order, at least give us some time to get the votes in Congress to pass Chairwoman Maxine Waters’ bill to have this moratorium go through December 31st,” Bush said on Monday.

And what about the landlords who are falling behind on their own mortgages because they can’t collect rents?

Bush said the $40-billion in congressionally appropriated rental assistance “can go to them.”

“The money should go directly to landlords, if that’s what needs to happen,” Bush said. “We should be thoughtful enough to try to figure this thing out so anywhere from 7 million people to 11 million people don’t end up on the street. Because, look, we haven’t fixed the housing crisis that we already have. How do we put more people on the street and then in a deadly global pandemic that is surging?

“We keep talking about it. Get the shots in arms and all of this, but how do we do that because the other thing is this, let’s remember, the research has just shown us the communities that have the highest number of filings for evictions also have the lowest vaccination rates, and we’re talking about communities of color. we’re Talking about the black community disproportionately being affected.

“Right now, I’m exhausted, I’m sleep deprived,” Bush said, referring to her vigil outside the Capitol. “My body is physically hurting, but it’s nothing in comparison to what will happen to those who are actually put out on the street and have to stay there.”

Bush is calling on Speaker Nancy Pelosi to reconvene the House, which is now on a seven-week break, to pass an extension of the eviction moratorium.

But on Sunday, House leaders, including Pelosi, issued a statement saying Biden should do so by executive order:

“Action is needed, and it must come from the administration,” the House Democrat leaders said in a statement:

That is why House leadership is calling on the Administration to immediately extend the moratorium.  As the CDC doubles down on mask-wearing and vaccination efforts, science and reason demand that they must also extend the moratorium in light of the delta variant.  Doing so is a moral imperative to keep people from being put out on the street which also contributes to the public health emergency.

We call upon the Treasury Department to indicate how the funds that it has already transferred to states and communities can be more effectively distributed to renters and landlords.