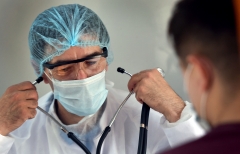 (CNS News) — The board of trustees of the American Medical Association (AMA) recently passed a resolution that calls for the removal of “sex designation” on birth certificates.  The AMA, founded in 1847, claims that its purpose is to “promote the art and science of medicine and the betterment of public health.”

The resolution distinguishes between a Certificate of Live Birth and a birth certificate. The former is usually two pages long, consists of 58 questions — including the baby’s sex — and is used for record keeping.  The latter is a government-issued document or card that states a person’s name, “birthdate, place of birth, sex, parents’ names, parents’ age, and parents’ place of birth,” reported the AMA.

The AMA notes that 48 states and the District of Columbia allow people to change the sex designation on their birth certificates, “to reflect their individual identities….” For instance, if a biological male chooses to identify as a female, he can have his birth certificate amended to reflect that change.

“Sex designation refers to the biological difference between males and females, which is what is recorded on the birth certificate,” states the AMA. “While there is no clear standard for defining sex designation, it is typically determined at birth by a child’s physician or parents based on external genitalia.”

However, “[g]ender is a social construct that describes the way persons self-identify or express themselves,” claims the AMA.  “A person’s gender identity may not always be exclusively male or female and may not always correspond with their sex assigned at birth.”

Some of the many gender identities include androgyne, bigender, butch, cis, queer, gender fluid, trans, pangender, and two spirit.

“It is the recommendation of the AMA’s LGBTQ Advisory Committee that our AMA should advocate for removal of sex as a legal designation on the public portion of birth certificates,” states the AMA. “Assigning sex using a binary variable and placing it on the public portion of the birth certificate perpetuates a view that it is immutable and fails to recognize the medical spectrum of gender identity.”

“Participation by the medical profession and the government in assigning sex is often used as evidence supporting this binary view,” says the medical organization. “Imposing such a categorization system risks stifling self-expression and self-identification and contributes to marginalization and minoritization.”

According to the Williams Institute at UCLA, “0.6% of U.S. adults identify as transgender,” or roughly 1.4 million adults.

In its conclusion, the AMA states, “Existing AMA policy recognizes that every individual has the right to determine their gender identity and sex designation on government documents. To protect individual privacy and to prevent discrimination, U.S. jurisdictions should remove sex designation on the birth certificate.

“… Our American Medical Association will advocate for the removal of sex as a legal designation on the public portion of the birth certificate, recognizing that information on an individual’s sex designation at birth will still be submitted through the U.S. Standard Certificate of Live Birth for medical, public health, and statistical use only.”

That resolution of the AMA’s board of trustees was adopted in June 2021.