U.S. Navy explosive specialists board a helicopter on the flight deck of the USS Ronald Reagan aircraft carrier to deploy to the tanker Mercer Street after the incident in the Arabian Sea. (U.S. Navy photo by Mass Communication Specialist 2nd Class Quinton A. Lee)

(CNSNews.com) – The United States is consulting with partner governments over a suitable response to a deadly drone attack on an Israel-linked ship in the Arabian Sea after accusing the Iranian regime of responsibility, Secretary of State Antony Blinken said on Sunday.

“Upon review of the available information, we are confident that Iran conducted this attack, which killed two innocent people, using one-way explosive UAVs [unmanned aerial vehicles], a lethal capability it is increasingly employing throughout the region,” he said in a statement.

“We are working with our partners to consider our next steps and consulting with governments inside the region and beyond on an appropriate response, which will be forthcoming,” Blinken said. “We once again offer our condolences to the families of the victims.”

The M/T Mercer Street, a Liberian-flagged, Japanese-owned tanker en route from East Africa to the United Arab Emirates, was targeted in international waters off the coast of Oman on Thursday. Two crew members, a Brit and a Romanian, were killed.

The 182-meter-long vessel built in 2013 is managed by Zodiac Maritime, a London-based company owned by an Israeli shipping magnate.

Iran’s foreign ministry has denied any link to the incident, although an Iranian state television channel quoted “well informed sources” as saying the attack was in retaliation for a suspected Israeli airstrike against a military airport in Syria in which two members of “the resistance” were killed.

(“The resistance,” in the parlance of the Iranian regime, refers broadly to its terrorist proxies in Lebanon, Gaza, Yemen, and Iraq, as well as the Assad regime in Syria.)

The British government also assesses that the Iranian regime was behind the incident, according to Foreign Secretary Dominic Raab, who condemned the “unlawful and callous attack.”

“We believe this attack was deliberate, targeted, and a clear violation of international law by Iran,” he said in a statement. “Iran must end such attacks, and vessels must be allowed to navigate freely in accordance with international law. The U.K. is working with our international partners on a concerted response to this unacceptable attack.”

Tensions between Israel and its arch-foe Iran have seen a number of incidents targeting shipping in the region. This is the first time lives have been lost.

“There is no justification for this attack, which follows a pattern of attacks and other belligerent behavior,” said Blinken. “These actions threaten freedom of navigation through this crucial waterway, international shipping and commerce, and the lives of those on the vessels involved.”

Zodiac Maritime at first reported that the incident was a suspected act of piracy, but later said details were still being established. It said the ship, which was not carrying a cargo, was “sailing under the control of her crew and under her own power at 14 knots to a safe location with a U.S. naval escort.”

U.S. Navy explosives experts were onboard the tanker “to ensure there is no additional danger to the crew, and are prepared to support an investigation into the attack,” it said. “Initial indications clearly point to a UAV-style attack.”

Romanian Foreign Minister Bogdan Aurescu did not immediately point a finger at Iran, but after speaking to Raab and his Israeli counterpart, Yair Lapid, he referred on Twitter to the need for a swift determination of the “origin and nature” of the attack.

“They agreed to work with the United Kingdom, Romania, and other international partners to investigate the facts, provide support, and consider the appropriate next steps.”

“The murderous regime in Iran & the terrorism it exports are a global threat,” Lapid said in a tweeted statement. “I am pleased that both the U.S. and the U.K. have condemned these terrorist acts.”

Lapid predicted that the threat posed by the regime will only increase when the “Butcher of Tehran” becomes president. The epithet alludes to Raisi’s history of involvement in the extrajudicial executions of thousands of dissidents in the late 1980s, and ongoing human rights abuses in the ensuing years.

“Israel will continue to hold conversations with our allies around the world and work together to formulate the necessary steps to combat ongoing Iranian terror.” 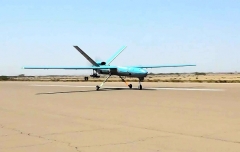 Amos Yadlin, a retired Israeli Air Force general and military intelligence chief, said the Iranian regime had “shot itself in the foot” by carrying out an attack on a Japanese-owned ship that left two European civilians dead.

Iranian foreign ministry spokesman Saeed Khatibzadeh denied any link to the incident and said Israel should “stop such baseless accusations.”

“This is not the first time the regime has made such accusations against the Islamic Republic of Iran,” he told a briefing. “Wherever this regime has gone, it has carried with it insecurity, terror and violence.”

“The Islamic Republic of Iran does not hesitate for a moment to protect the supreme interests of the people and its own national security.”