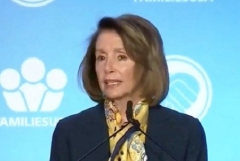 “Of the more than $46 billion provided by Congress, only $3 billion has been distributed to renters by state and local governments,” House Speaker Nancy Pelosi (D-Calif.) reported Thursday, calling for an extension of the federal eviction moratorium set to expire on Saturday.

“We have the power to extend the eviction moratorium to provide relief, as we encourage state and local governments to distribute the money that we allocated,” Pelosi said in a press statement.

“We must extend the eviction moratorium to provide more time for the funds to be disbursed,” Pelosi said, evoking the image of babies’ cribs being put out on the streets when families are evicted:

“I have seen families evicted from their homes.  It is one of the most heartbreaking situations you can see: cribs and personal belongings put on the street for all to see or take, families suffering the indignity of being forced out of their homes and having to find shelter.”

Since last December, as part of its coronavirus relief packages, Congress has allocated a total of $46.5 billion to state and local governments to be distributed as rental aid – but, as Politico reported on July 21, less than seven percent has actually been dispensed:

“State and local officials disbursed $1.5 billion in federal rental assistance in June, the Treasury Department reported Wednesday morning, bringing the total rental aid distributed over the first six months of the year to a little over $3 billion — about 6.5 percent of the total aid Congress has allocated.”

At least one trade group representing the rental industry has taken to court to obtain financial relief for its members, Reuters reported Friday: