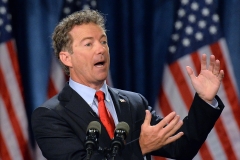 Sen. Rand Paul (R-KY) speaks to supporters during the kickoff of the National Stand with Rand tour. (Photo credit: Michael B. Thomas/AFP via Getty Images)

“There’s no science behind” the government forcing people with natural immunity to get the COVID-19 vaccine, Dr. and Sen. Rand Paul (R-KY) said on Tucker Carlson Tonight on Thursday.

Carlson was discussing President Joe Biden’s announcement that the COVID-19 vaccine is now mandatory for federal workers, regardless of individuals’ natural immunity statuses.

“All of the studies that have looked at natural immunity show that natural immunity has at least as good of an immunity as you get from a vaccine,” said Sen. Paul. “People have to realize that vaccines are based on what we learn from natural immunity over the last couple of hundred years, how the body responds to a foreign particle ─ a virus or a bacteria ─ and then we simulate that with the vaccine. So the vaccine is simulating the natural immunity that I have, but Dr. Fauci discounts it.”

He cited a recent study out of England that observed the Delta variant in 92,000 patients of varying ages. Zero vaccinated people under the age of 50 died in this study, and of the 52,000 people who were unvaccinated, six died. Over age 50, half the number of people died when compared with 2020 numbers.

“So, the Delta variant is more transmissible but less deadly,” Sen. Paul said. “But if you say that, Facebook will take you down; they’ll chastise you, take away your birthday, and say you’re spreading mistruth. But it’s absolutely factual.”

Below is a transcript of the segment.

Tucker Carlson: By our count, there are four physicians currently serving in the United States Senate. All of them, by the way, are Republicans. At least one of them has been brave enough to ask obvious questions about what is happening right now. Sen. Rand Paul of Kentucky joins us. Senator, thanks so much for coming on, so many questions —

Sen. Rand Paul: Good evening, thanks for having me.

Carlson: Thank you — to ask you. Let me just say this: the first, why would people who have recovered from COVID and have active antibodies and are therefore immune — they have natural immunity — why would they be forced to take an experimental vaccine to give them artificial immunity?

Paul: Yeah, there’s no science behind it. All of the studies that have looked at natural immunity show that natural immunity has at least as good of an immunity as you get from a vaccine. People have to realize that vaccines are based on what we learn from natural immunity over the last couple of hundred years, how the body responds to a foreign particle ─ a virus or a bacteria ─ and then we simulate that with the vaccine. So the vaccine is simulating the natural immunity that I have, but Dr. Fauci discounts it. Thirty-five million people officially have had COVID, but really, conservative estimates, even the CDC, indicate another 70-some-odd million have had it. So really, it’s over a hundred million Americans have had it. Probably 150, 160 million have been inoculated with the vaccine. Together, we have an enormous amount of success with immunity. In fact, the other day I saw that over 65 years of age, 90% of people have now been inoculated. So this is extraordinary success, and yet they say, “Oh no, we have to inoculate your newborn in the hospital before you can take them home. It makes no sense and the science doesn’t support it.”

Carlson: You’re a physician, licensed to practice, have practiced for many years. I thought it was part of the foundational ethics of American science that you could not force people to accept medicine — cognizant people who can make their own decisions — to accept medicines that they don’t want and they don’t need. Is that true?

Paul: Yeah, without question. In a free society, each individual makes their own decision. Medicine is based on your own individual history and ultimately on your choice. Sometimes you get more than one doctor’s opinion because all the doctors don’t agree on the advice.

Carlson: This seems like lunacy to me, as a non-expert. You are an expert. Are you worried that people in charge of the most powerful country in the world could make baldly irrational decisions, not be challenged on it, not be stopped when they do it? Where does that lead?

Paul: The real problem is when we get to groupthink, when there’s no more skepticism. And even scientists such as Einstein realized that science — it was important to be skeptical and always challenging each other. He always said, “Even I am one experiment away from being disproven.” We need skepticism — healthy skepticism — there needs to be robust debate. But realize what Facebook and Twitter are pushing us towards is a world in which there is no debate; there is only one truth, but they promulgate that truth; the truth comes from them. But they’re not disinterested people. Look at Dr. Fauci. One of the reasons he is being dishonest is if this virus attaches to the Wuhan lab and he’s been funding the Wuhan lab, it attaches with that moral culpability and responsibility. He wants none of that, but he can’t be impartial because any funding to the Wuhan lab now sticks to him. And that’s why he’s doing everything he can to cover it up.

Carlson: Man, maybe we could have a congressional investigation into that; that’d be great. Sen. Rand Paul, I appreciate your coming on tonight. Thank you, senator and physician.

Elisabeth Nieshalla is an intern reporter for CNSNews. A student at Taylor University, she studies Politics, Philosophy and Economics and was elected to serve as president of the Class of 2024. She also worked as editor of the opinions page for The Echo, Taylor University’s newspaper.