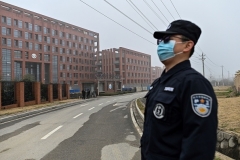 A security guard stands near the Wuhan Institute of Virology in Wuhan, a facility at the center of controversy over the theory that the coronarivus may have leaked accidentally from a lab. (Photo by Hector Retamal/AFP via Getty Images)

(CNSNews.com) – The politically-charged dispute over the origins of COVID-19 spilled over at the U.N. General Assembly on Wednesday, with the U.S. accusing China trying to “undermine” the investigation and Beijing’s envoy retorting that the U.S. was smearing China in a bid to deflect attention from “its botched response to the pandemic.”

Instead of spreading disinformation – by promoting the theory that the coronavirus may have leaked from a laboratory in Wuhan – the U.S. should invite World Health Organization (WHO) experts “to conduct origin research in the United States with an open and transparent attitude,” Chinese Ambassador Dai Bing declared.

The remarks came during an informal General Assembly plenary meeting, held to discuss a report issued earlier this year by an independent panel of inquiry into the pandemic.

China last week rejected a WHO proposal to include “audits” of labs in Wuhan – the city where the outbreak first emerged in late 2019 – in the next phase of the probe into its origins.

U.S. Ambassador Richard Mills told the meeting the U.S. was “deeply troubled by China’s attempt to undermine the WHO’s work through Beijing’s decision to not engage in the World Health Organization’s proposal for the next stage of the COVID-19 origin study.”

“China’s full cooperation in this scientific examination is a matter of critical importance to the world,” Mills said. “There is a responsibility to study and properly understand the origins of public health emergencies – a responsibility that is rooted in the need to protect us all, by better preparing for and preventing future biological catastrophes.”

When he took the floor later, Dai accused the U.S. of having “once again abused the U.N. platform and used the study of the origins as an issue to engage in political manipulation.”

“The United States is disregarding facts. It is using political manipulation for the purpose of deflecting attention [from] its botched response to the pandemic,” he said.

“For the purpose of smearing other countries, the United States is deliberately disinforming the global audience. They have completely lost their scientific integrity and pay scant attention to moral standards.”

Dai repeated Beijing’s reasons for objecting to the WHO proposal:  China had already twice invited WHO experts to visit to carry out research, and the expert team that visited earlier this year had effectively ruled out the so-called “lab-leak” theory.

“The experts visited all the places they had wanted to visit, they met with all the people they had wanted to meet,” he said. “They reached the science-based conclusion that it was ‘extremely unlikely’ that the virus was leaked from the laboratory.”

Dai said that that finding, and the experts’ call for a global search into possible earlier – that is, prior to the Wuhan outbreak – cases of COVID-19, had “received broad endorsement internationally.”

The next phase of the investigation should therefore focus on “the many early cases that have been already identified in various places around the world,” he said.

Dai advised the U.S. to “respect science, save lives, stop undermining international cooperation in the fight against the pandemic and the study of the origin.”

Chinese government officials and state media outlets have for more than a year been pointing fingers at U.S. biolabs, primarily a U.S. Army facility at Fort Detrick, Md., insinuating that a temporary suspension of operations there in the summer of 2019 was linked to the coronavirus outbreak later that year.

The Wuhan lab-leak theory, all but dismissed by the WHO-convened expert team earlier this year – and by many critics of President Trump last year – gained traction over recent months, as groups of scientists called for an independent origin probe, including examining the scenario of a lab accident.

Sometime before August 24, the U.S. intelligence community is due to report back to President Biden on its investigation into the origins of the outbreak, looking at both the natural and lab-leak hypotheses.

Among the recommendations in its report, the panel said the General Assembly should adopt a political declaration later this year setting out a roadmap for transforming pandemic preparedness and response; and governments should establish a “global health threats council.”

Clark said the envisaged council would be “tasked with maintaining political commitment” to preparedness for and response to pandemics – “a body that monitors progress, draws attention to gaps, and holds actors accountable.”

The IPPR said the WHO should be authorized by member states to publish information on disease outbreaks that could potentially become pandemics “without requiring the prior approval of national governments.”

It also said the WHO should be empowered “to investigate pathogens with pandemic potential in all countries with short-notice access to relevant sites.”

China insists it cooperated fully with the U.N. health agency from the outset. However, its stalling over selection of members of the WHO-convened team and on approving the mission’s “terms of reference” caused severe delays in the process.

From the time the WHO World Health Assembly in May 2020 passed a resolution mandating an international virus origin probe, it took 240 days until the experts were eventually able to fly into Wuhan last January.

Over that 240-day period the number of confirmed cases rose from below five million to almost 90 million, and the number of deaths from around 319,000 to two million.

US Scolds WHO Over Sluggish Approach to Investigating Origins of Coronavirus in China (Nov. 12, 2020)