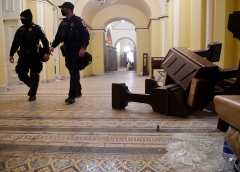 The aftermath of the January 6 attack on the U.S. Capitol building early as seen on January 7, 2021. (Photo by OLIVIER DOULIERY/AFP via Getty Images)

(CNSNews.com) – While much of Washington’s attention is focused on a trillion-dollar, bipartisan infrastructure bill, a $2.1-billion bipartisan supplemental spending bill dealing with lawmakers’ security is now working its way through Congress.

On Tuesday, Sen. Patrick Leahy (D-Vt.), chair of the Appropriations Committee, announced that he and ranking member Richard Shelby (R-Ala.) had agreed on the $2.1-billion bill (down from the $3.7 billion originally proposed by Leahy) that addresses costs incurred by Congress during the January 6 attack; reimbursement for COVID-related costs incurred by Congress; and humanitarian support and assistance for Afghan refugees.

“We have the responsibility to take care of the Capitol Police in the wake of their incredible service on January 6th, and to reimburse our National Guard for costs incurred protecting the Capitol,” Leahy said.

The Senate bill includes everything from “wellness and trauma support” for Capitol Police; “protective details for Members of Congress”; upgrades for Capitol windows and doors and new security cameras in the Capitol building; COVID-related “enhanced cleaning, personal protective equipment, telework equipment”; humanitarian assistance for Afghan refugees; security for the president-elect between the election and the inauguration; and “customary death gratuities” for the families of two congressmen who died in office. (See detailed listing below.)

The House passed a $1.9 billion supplemental Capitol security bill in May, but that bill did not include assistance for Afghan refugees.

“It’s not what we sent,” she said. “It’s certainly not what we need, but it is a good step forward.”

She said the House wanted to give bonuses to the Capitol janitorial staff, but that’s not included in the Senate bill. “But when we see what they pass, actually pass, we can talk about what we need to do along the way.”

Pelosi said the Senate bill is “long overdue,” and she noted that Leahy made his announcement on the same day four police officers testified about the attack on the Capitol: “I think actions yesterday by our law enforcement officers and their appeal to get something done as soon as possible has perhaps even jarred of the Senate to move in a bipartisan way to pass this legislation.”

Pelosi said, “we can’t wait another day until we strengthen our Capitol Police Force, strengthen the Capitol, the actual, physical Capitol.”

As described by Leahy’s office, the Senate bill includes the following:

$406 million for Capitol Police/Capitol Security, including:

1. $70.7 million in salaries and general expenses for the Capitol Police response to the January 6 attack and to meet urgent gaps and demands to protect the U.S. Capitol Complex, Members of Congress, congressional employees, and visitors, including:

— $31.1 million to backfill overtime expected until the Department can hire, train, and deploy more officers and benefits to retain current officers, including $6.9 million for hazard pay, $3.6 million for retention bonuses, and $2.5 million for tuition credits to help with retention;

— $3.3 million for the Intelligence Division for intelligence analysts and technical resources;

— $5.8 million for protective details for Members of Congress due to increased threats and risk assessments;

— $5 million for Equipment and Services, including $2.7 million for reimbursement for equipment since the January 6 insurrection, $1.3 million for gas masks, tactical vests, body armor and other equipment, $900,000 for cellular phone capability, and $100,000 for legal support;

— $2.6 million to procure basic riot control equipment to outfit all officers with ballistic helmets, batons, and body shields; and

— $283 million to upgrade accessible windows and doors of the Capitol Building and Senate and House office buildings; and

— $17 million to install new cameras around the Capitol Building and House office buildings for safety and security purposes.

4. $521 million to fully fund the cost of the National Guard deployment to Capitol Hill, which is urgently needed to prevent cancellation of summer drills for members of the Army National Guard and Air National Guard.

$42.1 million to provide for “safe and healthy congressional operations in response to COVID-19,” including:

— $22 million for the Architect of the Capitol for reimbursements and other costs of the response to COVID-19. This includes enhanced cleaning, personal protective equipment, telework equipment, essential overtime pay, and salaries of employees of impacted contractors subject to furloughs and/or layoffs.

— $7.8 million for the Senate Sergeant at Arms for reimbursements and other costs of the response to COVID-19. This includes personal protective equipment, telework equipment, contractor support costs, and emergency supplies.

— $800,000 for the U.S. Capitol Police for reimbursements and other costs of the response to COVID-19. This includes personal protective equipment and hotel rooms for officers and civilian staff who were unable to return home to due COVID-19-positive cohabitants.

1. $500 million for the Department of Defense to provide emergency transportation, housing, and other essential services to Afghan partners leaving the country. The Departments of Defense and State are currently coordinating on efforts to support these Afghans and their families, and additional funds are provided to State for similar purposes.

2. $25 million for the Department of Health and Human Services to provide assistance to Afghans granted special immigration status once they have arrived in the United States. This funding will support transitional financial, medical, and social services, such as medical screenings and housing assistance, to help this population resettle in the United States.

3. $600 million for Department of State for refugee and migration assistance and to improve and strengthen the Afghan Special Immigrant Visa (SIV) program, specifically:

— $500 million to provide emergency transport, temporary housing, and other basic services for Afghans who qualify for Special Immigrant Visas after serving as translators and in other capacities for the U.S. military.

— $100 million for assistance for Afghan refugees in neighboring countries and for other humanitarian needs in Afghanistan. (According to the bill summary, “The UN currently estimates that 500,000 Afghans will flee their homes in the coming months, and potentially many more. While Special Immigrant Visas offer safety to a portion of those whose lives are at risk, others – including teachers, scholars, female students, judges, and soldiers, and civil society leaders – are in jeopardy after participating in U.S. government programs, and can only seek asylum if they are refugees in a third country.”)

— The legislation would increase the number of authorized visas for Afghanis by 8,000; postpone the required medical exam until the applicant and their family have arrived safely in the United States; and provide Special Immigrant status for certain surviving spouses and children of murdered applicants.

— President-Elect Security: $1.1 million to reimburse state and local governments in providing security for the President-elect between the election and the inauguration.