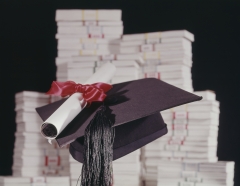 Pictured is a graduation cap in front of a pile of bills. (Photo credit: Harold M. Lambert/Contributor/Getty Images)

All over the world, the best educated white people are also the most likely to be stupid. There are exceptions, of course, but the generalization remains true nonetheless.

By educated, I mean the number of years spent in school, and nothing more. By stupidity, I mean a lack of common sense, as in a denial of human nature. By this measure, a large swath of the well-educated white people who live in North America, Europe, Australia, and New Zealand are plainly stupid people.

The latest evidence to support this observation can be found in the results of a Pew Research Center survey, published July 27. I hasten to add that the researchers at Pew did not come to my conclusion, but that has no bearing on my interpretation of their data.

Also, “those with a bachelor’s degree or more education are more likely than those who do not have a college degree to say a person’s gender can be different from sex assigned at birth.” Regarding race, white people are the most likely to accept this position; blacks are the least likely.

Let’s begin with Sociology 101. Then we can proceed to Biology 101.

The term “gender” is constantly misused these days: it means socially learned roles that are deemed appropriate for men and women. Thus, asking someone on an employment or medical form what “gender” he is makes no sense: the proper question is what “sex” the person is.

It is also inaccurate to say that someone’s sex was “assigned at birth.” No one is ever “assigned” his sex—it is a given. To be exact, every person who ever walked the face of the earth had his sex determined by his father. Period. In other words, the only person “assigning” the sex of the baby is the one keeping hospital records. Similarly, “gender-reveal” parties, which are really “sex-reveal” parties, are actually celebrations of what has been learned in utero about what the father has bequeathed.

Contrary to what so many educated white people believe, there is no such thing as a “non-binary” person. A human being is either a male or a female. He or she may deny this, but that is of no consequence. A person could, conceivably, think of himself as a giraffe, but self-identity is not dispositive. Reality matters more than subjective interpretations of it.

Here are some more basic biological facts that are resisted by educated white people.

A male carries the XY chromosomes; a female carries XX. Sorry, folks, there is no third combination—no XYZ exists. It’s a binary fact of life.

Another fact of life is that only females produce eggs. Males are incapable of doing so, and this certainly includes those biological men who identify as a woman. Here’s another reality check: a man can think of himself as a woman until the cows come home, but he will never be able to menstruate.

I have more bad news for those who have stayed in school too long.

Males have a penis, scrotum, and testicles. Females have a vagina, uterus, and ovaries. Yes, one can pay a doctor to mutilate his genitals and construct a Lego-type replacement—though many trans persons refuse to finish the job—but this is still not a game changer.

For example, males are continuously fertile from puberty—their sperms never stop being produced. Females are fertile for 12 hours a month, until menopause. Men have more testosterone and less estrogen than women; the obverse is also true. Males have a larger brain, thinner face, and larger veins than females. And so on.

The biological differences are evident everywhere. To take one example, the Olympics are the greatest demonstration of nature-based differences in the world. Men are stronger and faster than women, and it is this fact of life that drives sex segregation in sports. Even the most ardent feminists know this to be true. Otherwise, they would scream about discrimination and demand that all events be “inclusive” of both sexes.

The fundamental question remains. Why are educated white people the most likely to swallow the moonshine that a man who thinks he is a woman is, therefore, a woman (and vice versa)? The only plausible answer is that they have been the most indoctrinated by radical egalitarian ideologies.

To rebel against one’s own nature is sick; for others to affirm it is even sicker.

Fortunately, the notion that human nature does not exist is rejected by most of those who have less schooling, and who are non-white. More good news: It has had even less effect on those who live in Latin America, Africa, Russia, or Asia.

Educated white people who deny what nature, and nature’s God, has ordained, need to be deprogrammed. Either that or they will continue to prove just how stupid they really are.