CNN commentator Ana Navarro couldn’t even get Don Lemon to agree with her, as she appeared on his show Monday night to argue Tucker Carlson deserved to be harassed while vacationing with his family. Navarro became increasingly agitated as the liberal CNN host argued that even Carlson deserved to not be “intimidated” while out in public.

Lemon started the segment by admitting he didn’t want to have to side with the Fox “propaganda” host: “I never thought I would be in this position to maybe somehow have to defend Tucker Carlson, but we’ll see where this goes. I have mixed emotions about this one,” he acknowledged.

But Lemon went on to pose to his guests, Ana Navarro and Scott Jennings, that this confrontation may have “went a little too far.”

Yet Navarro, like fellow View host Joy Behar did yesterday, nonsensically defended the man who harassed Carlson as “not aggressive” and actually “polite.”

“[Y]ou know, I actually thought the guy who confronted him was quite polite, was not shouting, was not violent, was not aggressive in any way. He expressed his opinion in the same way that Tucker Carlson expresses his opinion on a nightly basis on a much larger platform,” she stated before saying that this kind of behavior comes with the territory of sharing your opinions on TV, relaying how she has also been confronted by a Trump supporter.

As the CNN host stated that shouldn’t happen to anyone on TV, Navarro got snippy.

She went on to argue Carlson deserved to be harassed for what he says on Fox:

“And look, when it comes to Tucker Carlson, it’s not just about infrastructure or immigration or you name it. It’s about COVID and it’s about life and death. I think people are very raw and emotional and angry about that in particular,” she said.

But oddly enough Lemon kept pushing back, despite defending Maxine Waters when she encouraged this type of hostility:

But First Amendment right doesn’t mean invading my personal space, I’m sorry, Ana. I understand what you’re saying and I get it. I think what Tucker says much of the time is completely reprehensible and divorced from reality. But he has a right to be in a space and not be accosted and not be ambushed by anyone…

Despite claiming she wasn’t “condoning” or “encouraging” these kind of public confrontations, Navarro again argued Carlson deserved it:

I’m saying that in the same way that Tucker Carlson spews out hatred every night and racism every night and anti-COVID rhetoric every night, which puts lives at risk, this guy in this fish store, whatever the hell it was, has a right to his opinion.

But much to her chagrin, Lemon couldn’t be convinced. “Look, I know it comes with a territory, but you know the difference between someone being aggressive and blocking you from walking or moving or not letting you get your point across,” he argued.

That’s when Navarro lost it:

NAVARRO: Okay. Where was Tucker Carlson when Donald Trump was saying you were the enemy of the people?

NAVARRO: They have been — they encouraged Trump, saying the media and the press was the enemy of the people, and shouting horrible things about CNN and other outlets.

NAVARRO: Forgive me if I don’t shed tears over Tucker Carlson.

NAVARRO: But I also don’t want to forgive them or forget the stuff they’ve done for four years. And I also want to acknowledge why people are angry. Listen, they’ve been spewing out crap about COVID and anti- Fauci stuff and anti-vaccine stuff, and people are dying.

LEMON: That doesn’t mean that you have to intimidate people in public.

NAVARRO: And people have every right to be furious.

LEMON: That doesn’t mean that you have to get in people’s face in public.

LifeNews Note: Kristine Marsh is Staff Writer for MRC Culture at the Media Research Center where this originally appeared. 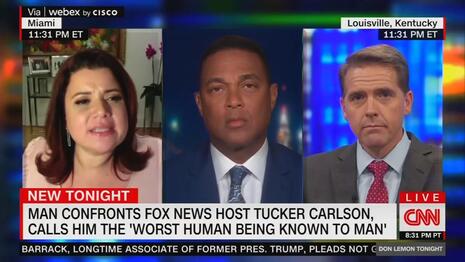