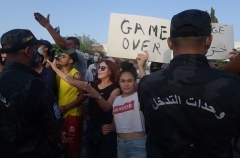 Supporters of Tunisian President Kais Saied demonstrate in front of the parliament in Tunis on Monday. (Photo by Fethi Belaid/AFP via Getty Images)

(CNSNews.com) – As the Biden administration assesses whether the Tunisian president’s assumption of powers constitutes a “coup,” developments in the North African nation that launched the so-called “Arab spring” a decade ago are exposing the fault lines between regional governments that support, and those that oppose, political Islam.

President Kais Saied, with military backing, on Sunday froze parliament for 30 days and ousted the prime minister, moving a day later to dismiss the defense minister and acting justice minister.

The actions, which come amid a long political crisis worsened by a coronavirus pandemic that has killed more people per capita in Tunisia than any other country in Africa or the Middle East, are seen as targeting Ennahda, the “moderate Islamist” party that is the biggest in parliament, and whose leader, Rached Ghannouchi, is parliamentary speaker.

Ennahda offices in several towns have been attacked by Tunisians angered by corruption and the economic and health crises. Some took to the streets to celebrate the president’s measures, and supporters of Saied confronted supporters of Ennahda near the parliament building on Monday.

Ennahda and some other political parties denounced the president’s move, which Ghannouchi described as a “full-fledged coup.”

White House Press Secretary Jen Psaki on Monday voiced concern about the crisis, but as to whether the administration considers Saied’s actions a coup, she said it would wait until the State Department had carried out a legal analysis before making a determination.

Secretary of State Antony Blinken spoke with Saied by phone, encouraging him “to adhere to the principles of democracy and human rights that are the basis of governance in Tunisia.”

The State Department said Blinken also urged Saied to “maintain open dialogue with all political actors and the Tunisian people.”

Under U.S. law, a coup determination would require a suspension of aid.

Ennahda’s establishment four decades ago was inspired by the Muslim Brotherhood, although it denies any affiliation with the controversial Egyptian-born movement.

Some autocratic regimes in the region, primarily Egypt, Saudi Arabia and the United Arab Emirates, view the Muslim Brotherhood as a primary enemy. (Egypt was ruled by an elected Muslim Brotherhood administration until ousted by the military under Abdul Fattah el-Sisi in 2013.)

Media outlets and commentators in Saudi Arabia, the UAE and Egypt have lauded the steps taken by Saied, viewing them as a blow against the Brotherhood.

The Saudi foreign ministry threw its support behind “the Tunisian leadership,” Turkey and Qatar, long sympathetic to the Brotherhood (and its Gaza-based Palestinian offshoot, Hamas).

In its response to developments in Tunisia, Turkey said it was “deeply concerned” about the suspension of parliament and expressed the “hope that democratic legitimacy will be swiftly reinstated within the framework of the provisions of the Tunisian constitution.”

Qatar voiced the hope that parties in Tunisia would “consolidate the foundations of the state of institutions and establish the rule of law.”