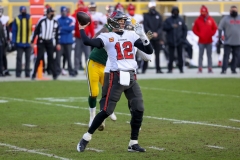 The Super Bowl Champion Tampa Bay Buccaneers opened training camp Monday with a new protocol designed to single out players who have yet to receive a coronavirus vaccine.

Last week, the National Football League (NFL) sent a memo announcing potential penalties for teams with unvaccinated players and recommended the wristband protocol as a way for teams to identify players who refuse to be vaccinated.

Despite the color-coding requirement, some Buccaneer players – most notably, quarterbacks Tom Brady, Blaine Gabbert and Kyle Trask, wore no wristbands at all on Monday – Flores reports in a follow-up article.

“We did not agree to them and think they are unnecessary,” NFL Players Association (NFLPA) President and Cleveland Browns player JC Tretter said in a statement addressing the wristband protocol Monday. In his statement, Tretter says “the NFL decided to actively muddy the waters in regard to our fight against the virus” by issuing last week’s memo:

“The NFL’s memo last week was a transparent attempt to pressure players to get vaccinated; and to do that, they sacrificed clarity and created confusion for players, coaches, media and fans, which I will clear up here.”

The Pittsburgh Steelers, the only other NFL team to begin practice on Monday, (other teams will begin camp on Thursday) are also employing the colored-wristband protocol.