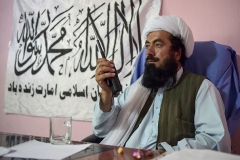 (CNSNews.com) – As the U.S. military leaves Afghanistan and what has been dubbed the “forever war,” there is little doubt the Taliban has retaken territory – but precisely how much is a mosaic that alters by the day.

“What the Taliban has done is take control of contested districts; that is how they have flipped the switch,” said Bill Roggio, Foundation for Defense of Democracies (FDD) senior fellow and editor of its Long War Journal. “In many cases, the Taliban was pre-positioned to take these districts.”

According to the Long War Journal analysis, as of July 27, the Taliban controls 224 of Afghanistan’s 421 districts – some 53 percent of the country – while 110 districts are considered to be “contested.” This marks a significant change from mid-April when the Taliban controlled 77 districts, with 194 disputed.

Analysts typically use the term “control” in this context to refer to those areas in which the Taliban manages government institutions, law enforcement, and administrative hubs, and has in place its own shadow leaders.

The group dominates much of the southern swathe of the country, including northern Helmand and Kandahar, but it is also gaining in Afghanistan’s north and central pockets.

The Taliban and partner groups have swooped into more than 145 districts in just the past two months, as per the FDD assessments. It also captured Spin Boldak, a critical border crossing with Pakistan.

Seemingly buoyed by the U.S. withdrawal, the group is documented to be edging closer to key cities such as Kunduz, Herat and Kandahar.

The Taliban claims to oversee 85 percent of Afghanistan territory, although that appears to be an exaggeration.

Analysts note that the areas dominated by the group are primarily scarcely populated, and that urban areas are still under government control. Thus more than half the population is still  living under government jurisdiction.

In contested regions however – where both the national government and the Taliban vie for control – the number fluctuates with migration flows.

Analysts like Roggio stress that the Taliban’s objective from day one has been to focus on territory rather than population control. The Afghan government accuses the Taliban of using skewed data as part of its propaganda campaign.

Afghan forces have managed to seize at least 20 mostly contested areas in recent months, data shows. The government says it has sent additional forces to all major cities.

Some analysts say it is essentially impossible at this stage to state accurately who “controls” various parts of the country.

“It is impossible to know who controls what sections of Afghanistan,” said Luke Coffey, director of the foreign policy center at the Heritage Foundation.

“This is a very fast-moving situation. There will always be areas in Afghanistan that are sympathetic to the cause of the Taliban. This is particularly true in the regions of the country predominately home to Pashtuns.”

“It is more important to look at who controls areas with the most population as opposed to who controls administrative boundaries found on the map,” he said.

Coffey also emphasized that with almost 420 districts in Afghanistan, taking one of them in a remote area might amount to simply capturing a road intersection and a single government building.

“Control over these districts go back-and-forth,” he said. “What I’ve noticed is that only when the Taliban captures an area do we see headlines in the western media. When the Afghan government re-captures the area, it never makes the media.”

U.S. officials are largely refraining from commenting on specific statistics. Earlier this month, Pentagon press secretary John Kirby told CNN that “claiming ground doesn’t mean you can sustain that or keep it over time.”

Roggio, who has been mapping the situation in Afghanistan for more than seven years, pointed out that the only other group with much pull in the country is the local ISIS affiliate, known as ISIS-K.

“But they have been relegated to fighting in cells and conducting attacks,” rather than securing turf, he explained.

Meanwhile it is Afghan civilians who are paying the price.

According to a U.N. report published this week, civilian casualties spiked 50 percent over the first half of this year compared to the same period last year.

It said anti-government forces were responsible for 64 percent of the casualties, while 25 percent were attributed to pro-government forces, and the remaining 11 percent to “collateral damage.”

Some 32 percent of casualties over that period were children, the report said.

The Biden administration has set August 31 as the date for the departure of the remaining U.S. forces, except for roughly 650 troops who are expected to remain to provide security for U.S. diplomats.

“It is impossible to know what will happen in six months,” said Coffey. “A provincial capital could very well fall to the Taliban. The Taliban will probably solidify their control over some of the areas they already control or contest. But it is naïve to think that the Afghan government and the Afghan military are unable or unwilling to continue to fight against the Taliban.”

“Let’s not forget that all of last year, the U.S. had just a few thousand troops on the ground,” he said. “Their mission was to train the Afghan military not to lead combat operations.”