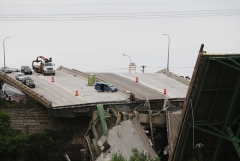 This devastating I-35 bridge collapse in Minneapolis on August 4, 2007 prompted urgent calls for action on improving U.S. infrastructure. (Photo by MANDEL NGAN/AFP via Getty Images)

(CNSNews.com) – “The infrastructure bill is a very important step in building back, but we want to do it better, and that’s what we intend to do,” House Speaker Nancy Pelosi (D-Calif.) said on Sunday, as she repeated her intention to hold a bipartisan infrastructure bill unless/until Senate Democrats ram through a second, $3.5-trillion “human” infrastructure bill.

“Are you sticking by your decision to hold any vote on that [bipartisan] deal until after the Senate passes a much larger infrastructure package through reconciliation?” George Stephanopoulos, host of ABC’s “This Week,” asked Pelosi:

“Yes,” Pelosi responded. “Let me just say, as I respond to you, I hope that they will pass the bipartisan legislation. Infrastructure has always been bipartisan for all the years that I’ve been in the Congress.”

The deal is not as green as I would like it to be, the (bipartisan) infrastructure bill, and I think that it’s something we could have passed a long time ago, even before the climate crisis was readily known to everyone.

But nonetheless, I hope it will pass. I won’t put it on the floor until we have the rest of the initiative.

Sen. Rob Portman (R-Ohio), one of the Republicans negotiating the bipartisan bill, told Stephanopoulos that Pelosi’s intention to hold the bipartisan bill until Democrats pass the rest of their agenda through reconciliation “is entirely counter to what President Biden has committed to and what the Senate is doing, which is a two-track process.

“The infrastructure bill has nothing to do with the reckless tax-and-spend extravaganza that she’s talking about,” he said. “So, no, I’m not happy with what she said, because it’s inconsistent with the agreement that we have on a bipartisan basis.”

Portman said if Pelosi insists on holding the bipartisan bill hostage to the much-larger bill that is full of social program only Democrats support, they could end up with nothing, even though the physical roads-and-bridges bill is “badly” needed:

I know that the bipartisan infrastructure package is very popular among the American people and in the United States Congress because it makes sense. We need it badly.

You know, 43 percent of our roads are in bad or mediocre condition, according to the engineers. Forty-six thousand bridges are structurally deficient. We have ships lining up at ports because our ports aren’t efficient enough.

Eighty-seven percent of the American people think we should do a bipartisan infrastructure package. It’s the right thing to do. Every president in modern times has talked about it. President Trump’s proposal was for $1.5 trillion infrastructure. Ours is about $579 billion over five years.

So, this is the right thing to do. It’s been totally bipartisan from the start. It’s the way we ought to be doing things here in Washington to get stuff done, and I can’t believe the speaker of the House would be blocking it.

Mass transit is the sticking point

Portman said the bipartisan bill is about 90 percent finished:

“We have one issue outstanding. And we’re not getting much response from the Democrats on it. It’s about mass transit. Our transit number is generous. We increased transit in this a proposal. We also increased the formula going forward. That’s the one issue that’s outstanding frankly at this point. My hope is that we’ll see progress on that yet today.”

Sen. Pat Toomey (R-Pa.) also addressed transit funding, telling CNN’s “State of the Union” that the federal government “historically” has given about $13 billion a year to mass transit:

That’s more money than the operating budget and the capital budgets combined of every single transit agency in America. It’s so much money, they couldn’t possibly spend it. So about half of it is sitting there not spent.

Despite that, we offered our Democratic colleagues a 35 percent increase in the annual run rate of the federal subsidies to transit and tens of billions of additional dollars in this bipartisan agreement on top of all the money that they got. And they’re saying that’s not enough.

That’s where we are, Jake. It’s an incredible amount of money, so much that they can’t spend what they have now. They have been offered many tens of billions more. And they’re saying that’s not enough. Nobody’s talking about cutting transit.

The question is, how many tens of billions of dollars on top of the huge increase that they have already gotten is sufficient? And that’s where there is a little disagreement.

Toomey also expressed Republican concerns about how the physical infrastructure bill will be paid for:

But I will tell you, a very, very important category for me is how all this is going to get paid for. We just spent $1.9 trillion that had — there was absolutely no need for. A lot of that money hasn’t been spent yet, but it will.

And now we’re talking about another $600 billion on top of the ordinary spending. And we know, in a couple of months, the Democrats are going to pass what they call a $3.5 trillion bill, but, really, over 10 years, it’s over $5 trillion.

This is completely out of hand. There are people who think this is Monopoly money, but it’s not, Jake. And so I’m concerned. I think the way we should pay for this increase in infrastructure spending is by repurposing money we already approved, but hasn’t yet gone out the door.

But that’s a point of great contention with the Democrats. So it’s not, to me, just the top line that matters. It’s also how we’re funding it.