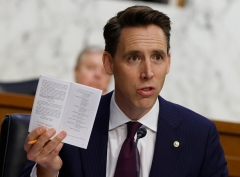 “This is not true. This is a great nation,” Hawley said:

We’re a nation of liberators. It’s time to reclaim that and to teach our children who we are, who they are, and that’s why my bill would say, listen, if a school district gets federal money, you’ve got to teach kids the basic truth about the country.

The Constitution, the Bill of Rights, the Declaration, Pledge of Allegiance — these are the things, the documents that express the ideals that unite us as Americans. You’ve got to replace the lies with the truth, and that’s what I’m trying to do.

Hawley said he plans to introduce a bill called the “Love America Act,” which aims to “teach kids who we really are as Americans and to reclaim that truth about our identity.”

He warned if children are not taught about the basics of America’s founding, “They lose faith in who they are; they don’t know who they are, and ultimately, we can’t continue our democracy.

“I mean, our experiment in democracy depends on a generation that loves this country, that knows who they are and is willing to have the faith to fight for it and to extend that great experiment into the future, and that’s what this is about.”

Hawley said the left, including advocates of critical race theory, are trying to divide the nation: