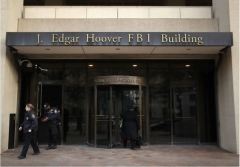 (CNSNews.com) – The Office of the Inspector General of the U.S Justice Department on Thursday published a three-paragraph “investigative summary” of a case it said involved an FBI assistant director who was “engaged in a romantic relationship with a subordinate.”

The “investigative summary” did not name the FBI assistant director or the subordinate.

The “investigative summary” carried this headline: “Findings of Misconduct by an FBI Assistant Director for Failure to Timely Report a Romantic Relationship with a
Subordinate and Related Misconduct.”

The three paragraphs of the summary said the following:

“The Department of Justice (DOJ) Office of the Inspector General (OIG) initiated an investigation after receiving information from the Federal Bureau of Investigation (FBI) Inspection Division, alleging that an Assistant Director was engaged in an inappropriate relationship with a subordinate.

“The OIG has completed its investigation and provided its report to the FBI and DOJ’s Office of Professional Responsibility for appropriate action.”