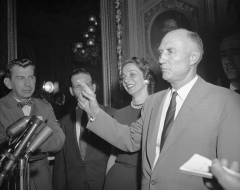 The late Senator Strom Thurmond (D-S.C.) is mobbed by reporters as he steps from the Senate Chamber after ending his 24-hour, 18-minute filibuster against the Civil Rights Bill. Thurmond’s talkathon broke the record set in 1953 by Senator Wayne Morse (D-Oreg.). (Photo from Bettmann Collection via Getty Images)

(CNSNews.com) – One of the people who questioned President Joe Biden at a CNN town hall Wednesday night aligned herself with the Democrats’ drive to abolish the filibuster, which would completely sideline the minority party — which now happens to be the Republican Party.

With a narrow margin in the House and a one-vote margin in the Senate, Democrats hardly have a mandate to squelch Republicans, but no matter. Many Democrats have indicated they’d have no qualms about ramming through their agenda without a single Republican vote.

“Cindy” told Biden: “I am dismayed at how often Democratic plans for stabilizing the economy, for shoring up new strains of the virus, are held hostage by the utopian need to gain bipartisan support. It appears at every turn the Democratic plan is weakened and still secures zero Republican votes. Sometimes the opposition is just wrong, and working to get them to agree with you is fruitless. Why is the strategy to abandon the need for bipartisanship not the right answer?” she asked.

Biden responded that as a senator and as vice president, “I was able to get an awful lot of compromises put together to do really good things, to change things. And I still believe that’s possible, but the well has been so poisoned over the last four years, and even now there’s still this lingering effort.”

He also indicated that bipartisanship is making a comeback.

Biden endorses talking filibuster: ‘You have to maintain the floor’

Later, another member of the audience asked Biden why he isn’t pressing to end the Senate filibuster to “secure the right to vote.”

“I’ve been saying for a long, long time the abuse of the filibuster is pretty overwhelming,” Biden responded.

Even then, if you were to filibuster, you had to stand on the floor and hold the floor, and that’s why Strom — I think set the record at 24 straight hours or something. Don’t hold me to the number but — you know?

So you had to take — there were significantly fewer filibusters in those days. In the middle of the civil rights movement.

I would go back to that where you have to maintain the floor. You have to stand there and talk and hold the floor.

Biden said he wants Congress to pass voting legislation, “get it to my desk so I can sign it.”

What I don’t want to do is get wrapped up right now in the argument whether or not this is all about the filibuster.

But what I want to do is I’m trying to bring the country together. And I don’t want the debate to only be about whether or not we have a filibuster or exception to the filibuster or going back to the way the filibuster had to be used before.

Host Don Lemon asked Biden, “But isn’t that the only way you’re going to get it (voting bill) done right now?”

Lemon pressed Biden, “If it’s a relic of Jim Crow, it’s been used to fight against civil rights legislation historically, why protect it (the filibuster)?”

“There’s no reason to protect it other than you’re going to throw the entire Congress into chaos, and nothing will get done, nothing at all will get done,” Biden said.

“For example, wouldn’t my friends on the other side love to have a debate about the filibuster instead of passing the recovery act? Or wouldn’t they love doing it instead of being in a position where we provide for — how many of you have children under the age of 17. Raise your hand.

“Guess what? You’re getting a lot of money in a monthly check, aren’t you? No, no, no. I really mean it. Republicans used to fight for it as well. It’s called the child tax credit…”