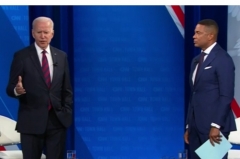 (CNSNews.com) – Roman Catholic Archbishop Dennis M. Schnurr of Cincinnati put out a statement on Wednesday saying that he would not have granted his approval for a town hall that President Joe Biden held that night at a Catholic college located in Cincinnati.

The archbishop indicated, however, that he had not been asked for his approval and that college in question was not under the oversight of his archdiocese but that of an order of Catholic nuns.

CNN held a town hall with Biden at 8:00 p.m. Eastern time at Mount St. Joseph University in Cincinnati. The university is controlled by the Sisters of Charity. The town hall was moderated by CNN’s Don Lemon, who is a self-professed homosexual and who has been listed by The Advocate as on of “The 50 Most Influential LGBT People in Media.”) (The Catholic Catechism states that “homosexual acts are intrinsically disordered” and “acts of grave depravity” that “are contrary to the natural law.”)

“Archbishop Dennis M. Schnurr has not been contacted by any involved party about the upcoming visit of President Joseph R. Biden to Cincinnati to participate in a CNN town hall meeting at Mount St. Joseph University. Archbishop Schnurr has therefore not been asked for, nor would he have granted, his approval for any such event to occur on Catholic premises. Mount St. Joseph University operates under the sponsorship of the Sisters of Charity and not under the direct oversight of the Archdiocese of Cincinnati.”

On its website, Mount St. Joseph University describes itself as a “Catholic university.” It says:

“Mount St. Joseph University, established by the Sisters of Charity of Cincinnati, opened its doors to the first 20 students in 1920 as the first Catholic university for women in Southwestern Ohio.

“With the growth of student enrollment, the Sisters of Charity made plans to develop property at the intersection of Delhi and Neeb roads, and opened a new campus in the fall of 1962. In 1986, the University was formally declared coeducational. The University, though incorporated under a Board of Trustees in 1972, remains a sponsored ministry of the Sisters of Charity.”

The Catholic Catechism says he following about homosexuality:

“Homosexuality refers to relations between men or between women who experience an exclusive or predominant sexual attraction toward persons of the same sex. It has taken a great variety of forms through the centuries and in different cultures. Its psychological genesis remains largely unexplained. Basing itself on Sacred Scripture, which presents homosexual acts as acts of grave depravity,140 tradition has always declared that “homosexual acts are intrinsically disordered.”141 They are contrary to the natural law. They close the sexual act to the gift of life. They do not proceed from a genuine affective and sexual complementarity. Under no circumstances can they be approved.”