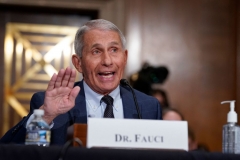 Dr. Anthony Fauci, director of the National Institute of Allergy and Infectious Diseases, responds to questions by Senator Rand Paul during the Senate Health, Education, Labor, and Pensions Committee hearing on Capitol Hill in Washington, DC on July 20, 2021. (Photo by J. SCOTT APPLEWHITE/POOL/AFP via Getty Images)

(CNSNews.com) – Sen. Rand Paul (R-Ky.) said Wednesday that he will send a letter to the Justice Department asking it to investigate whether or not Dr. Anthony Fauci, director of the National Institute of Allergy and Infectious Diseases (NIAID), lied when he testified before Congress about federal funding of gain-of-function research.

During a Senate Health, Education, Labor and Pensions Committee hearing on Tuesday, Paul asked Fauci, “Dr. Fauci, knowing that it is a crime to lie to Congress, do you wish to retract your statement of May 11, where you claimed that the NIH never funded gains-of-function research in Wuhan?”

“I have never lied before the Congress, and I do not retract that statement,” Fauci responded.
https://www.foxnews.com/politics/rand-fauci-doj-investigation

“I think it’s important to know that Dr. Fauci has a self-interest in obscuring any relationship or responsibility for anything done in the Wuhan lab. Without question, the evidence we presented in committee yesterday shows the NIH was funding research in Wuhan. We showed the exact numerical series of numbers that goes with the grant numbers,” the congressman said.

“So yes, they were funding the Wuhan lab. The second question is whether or not the research was gain of function. The NIH actually defines gain of function, and I read that definition to him, but he didn’t listen,” Paul said.

“Without question, this is what happened in the Wuhan lab. We have a number of professors who have said so. We put the quote up from a professor of 30 years at Rutgers, tenured professor, who said that what they were doing in the lab in Wuhan was the epitome of gain of function, but you have to realize that Dr. Fauci’s not disinterested,” the senator said.

“If this virus came from the lab, and it’s clear that he was funding dangerous research, moral culpability responsibility attaches to him, and he does not want that, so he’s shirking that, but in so doing, he’s not being honest with the American people or Congress,” Paul said.

Host Martha MacCallum pointed out that Fauci claims that Paul lied about him, because there was no gain-of-function research funded by U.S. taxpayer dollars. She noted that Fauci accused Paul of suggesting that there was a link between the money that went from the U.S. to potentially the actual COVID-19 virus that leaked from the Wuhan lab.

“He once again set something up that we weren’t suggesting. He was saying that the viruses discussed in the paper that we presented from Dr. Xi, the bat scientist, that those viruses were not COVID-19. We were not alleging that. We’re not alleging that Dr. Xi wrote a paper talking about how she created COVID-19. We’re saying that she was doing gain of function research. The paper proves it,” Paul said.

“The one way to get to the bottom of this, Fox can do this. You could bring in 10 disinterested scientists in this field and ask them if this is gain of function research. There are a bunch of them that will speak on this, but there are many of them who are frightened because their livelihood depends on NIH dollars, and Dr. Fauci controls that money,” the senator said.

“There’s a number of them that have been discussing this all the way back to 2002, the professor that we brought the quote from. He says he’s been interested in gain of function research and limitations that we should have on it since 2002,” Paul said.

When asked what kind of reaction he expects to get from the DOJ to his letter calling for Fauci to be investigated for lying to Congress and whether Attorney General Merrick Garland wants to pursue it, the senator said, “I’ll assume they’ll act in a partisan way, and they will not pursue it, but the thing is, is, there are ways that the public can also pursue it.

“Right now, Fauci’s getting away with this, because no one’s questioning him. He only goes on left-wing networks. They give him easy questions like, ‘Ha, ha, ha. Isn’t Rand Paul so out there.’ That’s the kind of questions he gets. Nobody asks him why isn’t it gain of function research. Why, if this scientist says it’s the epitome of gain of function, how are you still denying it?” he said.

“You have to understand. There is a self-interest in preservation for Dr. Fauci not to be associated with the Wuhan lab and not to admit that he helped to fund this research,” Paul added.