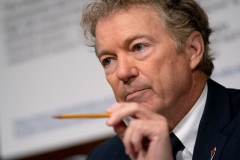 (CNSNews.com) – “In a free country, individuals make their own decisions on their medical care based on their own risks,” Sen. Rand Paul (R-Ky.) told Fox News’s Sean Hannity Tuesday night.

Paul, a medical doctor, said the risks of contracting COVID are “wildly different” for different people:

And unlike most other medical professionals, Paul noted that obesity — a condition that theoretically is within an individual’s control — is among the risk factors.

If you’re under 25, the risk of COVID is about one in a million, less than the risk of being struck by lightning.

So if you feel that you want extra safety and you decide for your children, that’s fine. But the thing is, everybody should get to make their decision.

Paul said people are “smarter” than the left gives them credit for:

“Evidence that people make good decisions — 85 percent of people over 65 decided to get the vaccine. That’s sort of a popular vote in favor of people deciding that it was a good idea. But it shouldn’t be forced or mandated. In a free society, we all make those decisions ourselves.”

Paul, who has had COVID-19, says he has natural immunity.

He noted that a Cleveland Clinic study of 52,000 people who recovered from COVID, but had not been vaccinated, “did just as well as those who are vaccinated. So yes, the vaccine works. But so does natural infection,” he said.

“And here’s the thing about the crazy left-wing trying to deny natural immunity. Vaccines are based on natural immunity. We learned how to do vaccines once we learned that the body actually had an immune response that prevented infection in the future.

“And yes, we have memory cells, both T and B cells. They have looked in bone marrow. It’s long lasting. For some diseases like the Spanish flu from 1918, there were people that were alive until recently that they still measured immune responses in their blood 90 years later.”