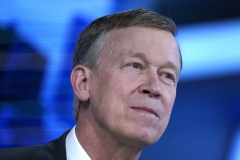 (CNS News) — When asked whether the Biden administration should work with Facebook to suppress postings it considers vaccine misinformation, Sen. John Hickenlooper (D-Colo.) said, “They should certainly be talking to each other.”

At the U.S. Capitol on Tuesday, CNS News asked the senator, “Should the Biden Administration work with Facebook to suppress postings it considers vaccine misinformation?”

Sen. Hickenlooper said, “Well, there should be some – obviously that’s a very complicated question in terms of who makes that decision and how you protect free speech. We have to try and limit this information, without question.”

CNS News asked again, “And should the Biden administration work with Facebook to do that?”

“They should certainly be talking to each other, for sure,” he said.

In a follow-up, CNS News asked Sen. Hickenlooper whether there are any other types of speech the administration should work with Facebook to suppress.

He did not have time to answer as he went into a Senate hearing where the Health, Education, Labor and Pensions Committee questioned Dr. Anthony Fauci about the COVID-19 vaccine and the origins of the virus.

President Joe Biden was asked on Friday, July 16, about social media platforms like Facebook and the alleged spread of COVID-19 vaccine misinformation.

White House Press Secretary Jen Psaki told CNS News during her press conference on Monday that the White House has “not asked Facebook to block any individual posts,” but the Biden administration “certainly raised where we have concerns about information that’s inaccurate, that is traveling out there in whatever platform it’s traveling on.”

On July16, Psaki said the administration is “in regular touch with these social media platforms, and those engagements typically happen through members of our senior staff, but also members of our COVID-19 team, given, as Dr. Murthy conveyed, this is a big issue of misinformation, specifically on the pandemic.”

As the federal government, she said, “We’ve increased disinformation research and tracking within the Surgeon General’s office. We’re flagging problematic posts for Facebook that spread disinformation.”

“You shouldn’t be banned from one platform and not others, uh – if you – for providing misinformation out there,” said Psaki.

Rep. Thomas Massie (R-Ky.) responded to her comments by stating on Twitter, “Her statement makes it abundantly clear they want people banned for simply disagreeing with the government’s pre-approved narrative.”