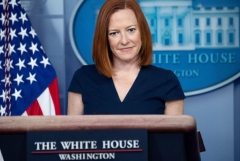 (CNSNews.com) – The White House said Monday that it does not need to give former President Donald Trump “an embroidered invitation” for him to encourage people to get vaccinated against COVID-19.

Fox News White House Correspondent Peter Doocy asked White House Press Secretary Jen Psaki, “On vaccine hesitancy, as COVID-19 cases rise, if this is becoming a pandemic of the unvaccinated, and you guys are having a hard time getting a certain part of the population to go get the shot, would President Biden ever call former President Trump and say, ‘I need your help. Let’s cut a PSA and tell people to go do it?”

“First, I would say that what we’ve seen in our data is that the most trusted sources are local officials, doctors, medical experts, civic leaders, clergy from time to time, and that is where we have really invested our funding and our resources,” Psaki said.

“We’ve seen almost every former president play a role in putting out a PSA, making sure people understood in the country that the vaccine is safe and effective,” the press secretary said.

“We don’t think that requires an embroidered invitation to be a part of, but certainly any role of anyone who has a platform where they can provide information to the public that the vaccine is safe, it is effective. We don’t see this as a political issue. We’d certainly welcome that engagement,” she said.