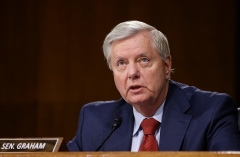 Sen. Lindsey Graham (R-S.C.) says he’ll do whatever it take to block the Democrats’ $3.5T wishlist. (Photo by EVELYN HOCKSTEIN/POOL/AFP via Getty Images)

(CNSNews.com) – Sen. Lindsey Graham (R-S.C.) says he would “do anything I could,” including leaving town, to stop Democrats from passing a $3.5-trillion bill full of social programs and other wish-list items without a single Republican vote.

“I would leave before I would let that happen,” Graham told “Sunday Morning Futures” with Maria Bartiromo. “So, to my Republican colleagues, we may learn something from our Democratic friends in Texas when it comes to avoiding a $3.5 trillion tax-and-spend package: Leave town.”

Texas Democrats walked out of a special session of the state legislature last week and flew to Washington, to deny Republicans the quorum they need to pass a voting integrity bill and other priority items.

Graham told Bartiromo he would expect the same treatment:

Hey, Vice President Harris, if you think these people are heroes, well, then I expect you to show up and pat us on the back.

Hell, yeah, I would leave. I’m not — I will use everything lawfully in my toolbox to prevent rampant inflation. A $3.5 trillion infrastructure package that’s got nothing to do with infrastructure, that is a tax-and-spend dream of the socialist left. If it takes me not showing up to stop that, I will do it, because, if we pass that bill, you’re going to have inflation through the roof.

So I’d do anything I could to stop that.

This came after a federal judge in Texas ruled that the Deferred Action for Childhood Arrivals program, established by executive fiat during the Obama administration, is illegal. The ruling blocks new DACA applicants.

“I urge Congress to act swiftly to enact legislation through the reconciliation process to provide permanent protection that the American people want and Dreamers have earned,” Mayorkas said.

Reconciliation, which requires only 51 votes, may be used to pass certain budget-related bills, but it’s not supposed to be used for changes in immigration law.

Sen. Graham is among the Republicans who support a $958-billion, bipartisan, physical infrastructure bill — roads, bridges, etc. — as long as it is paid for. “We’re having a hard time paying for the $958 billion, because we’re not going to raise taxes,” he said on Sunday. “But everybody’s trying really hard.”

“As to $3.5 trillion reconciliation package designed to pass without a single Republican vote, Joe Manchin has said that has to be paid for. And the only way you can do that is through a massive tax increase,” Graham continued.

“And the reconciliation package is not infrastructure. It’s big government, a liberal wish list, paid family leave, all kinds of new social programs unrelated to infrastructure. So, we will see if they can get Democratic support.

“But before Republicans beat up on the Democrats in Texas for leaving Texas too much, if, for some reason, they pass reconciliation, a budget resolution to bring that bill to the floor of the United States Senate, the $3.5 trillion bill, you got to have a quorum to pass a bill in the Senate. I would leave before I would let that happen…”

Graham said legal status for DACA recipients does not fall under reconciliation, but Democrats may try to pass it that way “because they don’t want to work with us.”

In 2013, I was part of a bipartisan group that passed a comprehensive immigration bill, and we spent $40 billion to secure the border. Schumer and Durbin voted for a $40 billion border security bill that built walls, did away with catch and release.

To my Democratic colleagues, if you want to provide legal status for the DACA population, I will work with you. Here’s what I want. I want you to finish the wall, which needs to be finished, and end catch and release for the asylum seekers, which will shut off a wave of illegal immigration, and I will vote for DACA legalization.

If you voted for Joe Biden thinking he would be a moderate voice and would lead us to a centrist agenda, you have got to be sorely disappointed, because there’s nothing moderate about the Biden administration.

The Biden administration on Friday reported 188,829 apprehensions at the Southwest Border for the month of June alone, continuing a sharp increase since Joe Biden became president. For the fiscal year so far, more than 1.1 million illegal aliens have been apprehended at the Southwest border, and an untold number have managed to sneak into the country.

Graham warned that we don’t know how many got away or what their intentions are:

“But I know this, that, if you start legalizing people without first securing the border, you will — you will incentivize more illegal immigration.

“We have never in the past legalized one person until you first secured the border. If they put amnesty in the reconciliation package, then the numbers you’re talking about are going to double by the end of the year. And they’re also talking about eliminating the ability to deport people who came here illegally based on COVID concerns under Title 42.

“So, if you put amnesty in the reconciliation package, and you do away with Title 42, there’s no defenses left, and you will have an invasion of illegal immigrants in this country like you have never seen before,” Graham said.