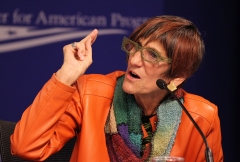 The year was 1993. Republicans and Democrats flocked to the House floor, one right after another. The debate was eerily similar to the one some members of Congress had Thursday: should taxpayers be forced to pay for abortions? President Bill Clinton watched the fireworks from a couple of miles away from the White House, where he’d started this whole argument. For the first time in 17 years, he’d presented a budget with zero abortion restrictions, plunging Congress (and the country) into a furious debate that — until this week — had been a non-negotiable truce.

“You’re going to get a million more abortions,” argued the late Rep. Henry Hyde (R-IL), after whom the famous amendment is named. “We’re awash in a sea of blood.”

Then, as now, Democrats resorted to a line about discrimination, arguing that this is about fairness for poor women. Tempers, the New York Times reported that day, got hotter. When things finally quieted down a half-hour later, Democrats insisted on an exception for the “health of the mother,” which Hyde blasted as amounting to “abortion on demand.” At the end of the day, Clinton’s party couldn’t muster the votes it needed to do away with the longtime compromise.

That changed this Thursday. For the first time since 1993, the House advanced a bill that puts the price of killing innocent unborn children on the backs of unwilling taxpayers. After an intense five-hour debate, the Appropriations Committee, led by extremist Rep. Rosa DeLauro (D-CT), voted to strip the Hyde amendment from the bill — a move so radical that it hasn’t been done in decades. Republicans desperately tried to stop the Left — with more than 24 of them lining up to speak out about the betrayal of the agreement that’s been in place for 45 years.

“This is a very passionate issue for so many of us,” Rep. Ashley Hinson (R-IA) said.

Right now, she pointed out:

Americans are sitting around their kitchen tables right now worrying about paying their bills. They’re worried about their jobs. They’re worried about their loved ones, especially coming out of a devastating pandemic. They’re worried about getting a spot in child care. They’re worried about putting food on the table, keeping lights on, and making ends meet. Those are the real kitchen table conversations happening in Iowa and around the country. They’re working hard for their paychecks and they hold strong convictions, much like most of us in this room. But what an absolute slap in the face to millions of Americans who are working so hard and strongly oppose elective abortions to tell them, “Hey, you know what, we know you’re struggling, but we are going to fundamentally force you to do something you don’t agree with. Send your taxpayer dollars here to Washington, and we’re going to use them to pay for this horrible act that you oppose.” That’s just wrong, and it’s reprehensible. And I’m frankly ashamed that we are even having this fight today.

Others rose, delivering powerful and fiery speeches about the immoral decision Democrats are forcing on the country with this crusade.

“Nothing in this amendment, in the Hyde language, or in the Waldon language would prevent a woman from seeking an abortion,” Rep. Mike Simpson (R-ID) argued. “Nothing. But most of the debate has been about a woman’s right to have an abortion — and whether that’s health care or not. That’s not the debate. The debate is: who has to pay for it? And whether someone that has religious objections to abortion should be required to perform one or participate in one. That’s the only debate here [today], and it seems like there should be bipartisan support for that.”

In the end, there was bipartisan support. Rep. Henry Cuellar (D-TX) rejected his party’s extreme lurch and stood with Republicans for the unborn, the women, and the American people. But it wasn’t enough. Joe Biden’s party sent a bill to the full House floor that makes co-conspirators out of U.S. taxpayers for a bloody agenda they want no part of.

“If you think more money needs to be put into abortions, if you believe in abortion rights, you have every right to donate your money to organizations…that support abortion,” Simpson argued. “You have every right to do that. What you don’t have a moral right to do is to tell me [who] believes that abortion is morally wrong, to forcefully take money from my pocket to fund abortions. That is morally wrong…we’ve been told, ‘Well, follow the science, just follow the science.’ I am following the science and the science that matters to me is that every abortion ends in one dead person.”

Rep. Andy Harris (R-MD), a doctor, watched the vote unfold with sadness — like every other pro-lifer.

“I think it’s going to be up to the Senate,” he warned on “Washington Watch,” to put a stop to this. “It’s going to be up to Mr. [Mitch] McConnell.” Fortunately for Americans, the Senate Minority Leader is up for the fight. In a shot across the bow Thursday, he watched what unfolded in the House with absolute disgust and went to his own floor to shame it.

This newfound opposition to the Hyde Amendment is “yet another way in which the [Biden] administration has sold itself as ‘moderate and unifying’ but ‘is now spiraling way to the Left…’ since the 1970s, abortion has claimed the lives of more than 60 million unborn children. But at the very, very least, the mainstream bipartisan Hyde Amendment has ensured that taxpayers’ hard-earned money is not funneled into this brutal practice in today’s Democratic Party.” Now, he shook his head, “There is no room to dissent from the far-Left in the culture war — even in the most modest, most long-standing, most popular ways.”

For now, FRC is proud of all the House Republicans who stood together in defense of innocent human life. For the first time in a long time, more Republicans spoke out for the unborn than Democrats did for abortion. They may not have won the vote, but they’re winning the argument. And in the end, that’s what will matter for this debate — and our future.

Tony Perkins is the president of the Family Research Council.