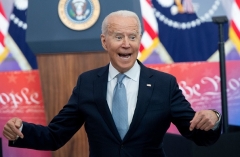 Last week, Biden, who ran for president on a “unity” platform, attributed racial motives to the “onslaught of (Republican) state laws” that he said are “undermining voting rights in old and new ways.”

“He’s trying to change the subject, because he can’t talk about his policies. His policies are failing at the border,” Graham responded:

Rampant inflation. You can’t walk out in the streets without worrying about getting shot or your child kidnapped. Radical Islam is on the rise. So he can’t talk about policy, because he’s failed on the policy front. So he’s trying to make all of us racists as Republicans.

I have known Joe Biden for 20, 25 years. I have never seen this Joe Biden. This is demagoguery. It’s offensive to me and every state trying to shore up their voting laws. What Joe Biden is telling you about what we’re doing is a lie. And the reason he’s doing it is to change the subject to try to talk about anything but his failed presidency.

President Trump won the 2016 on a promise to build a wall at the Southwest border. That wall, never completed, has now been abandoned by the Biden administration, which has done nothing to stop the onslaught of illegal immigration.