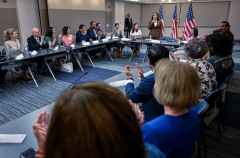 Vice President Kamala Harris (C-R) meets with Democratic members of the Texas State Legislature at the American Federation of Teachers building near the US Capitol in Washington, DC, July 13, 2021. (Photo by ANDREW CABALLERO-REYNOLDS/AFP via Getty Images)

(CNSNews.com) – Texas state Rep. Richard Raymond (D) on Thursday tried to justify his and his Democratic colleagues’ decision to leave the state to try to thwart Republican efforts to pass a voting bill in Texas by comparing it to a bill that would allow child abuse.

“If you can imagine that you’re an elected official in the legislature. You knew, for example, there was legislation that would allow abuse of children in your view of the way that we’re laying it out, it would allow children to be abused, and you know the votes were there to pass,” Raymond told Fox News’s “Your World with Neil Cavuto.”

“Now, if you’re telling me you’d stand there and take it when you know you could stop it, well that’s a difference between you and me, and that’s why I stand up. That’s why I ran. That’s why I got elected, because I will stand up. When it’s something that goes too far, Neil, I will do it just like Abraham Lincoln did,” he added.

CAVUTO: All right. Well I knew Abraham Lincoln. I studied Abraham Lincoln. I’m not quite sure, Representative, if you’re Abraham Lincoln, but you’re comparing child abuse, an issue like that to a voting measure that is hardly as sweeping as you proclaim. I guess what I’m asking you then, if this never comes to the federal level, Representative, do you then go back to Texas and do you then acknowledge under the full possibility of arrest when you get home that this mission failed? That it was a waste of time?

RAYMOND: It is never a failure to try to save the democracy, and that’s what we’re trying to do, Neil. You may not agree with it. That’s okay, but you don’t have any problems. They probably don’t harass you.

They probably don’t make it difficult for you to go vote, but you know, Neil, if you live long enough, if you get old enough and heaven forbid, if you face some disability at some point in your life or someone you love faces a disability at some point in their life, and they move to the state of Texas, the legislation that’s being contemplated will affect your ability to vote.

We heard from so many people, Neil and maybe you would just belittle them if you heard their testimony, people who are disabled – a lady with cerebral palsy talking about how this would affect her. If you think that that is just partisan or I don’t know what you think, respectfully, I’m going to disagree with you. We represent real people. We work for real people.

CAVUTO: All right. That’s debatable if that is in this legislation. By the way, when it comes to disabilities, I think I know a little about it.