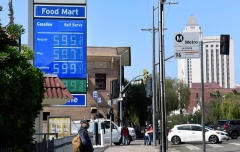 (CNSNews.com) – Inflation was the main concern Wednesday at a hearing of the House Financial Services Committee, where Federal Reserve Chairman Jerome Powell took more than a dozen questions, from both Democrats and Republicans, on that topic.

“Inflation has increased notably and will likely remain elevated in coming months before moderating,” the Fed chair said in his opening statement.

He called the situation “transitory,” but during questioning, he qualified that: “We lack certainty on that, but we do believe that’s the case.”

Rep. Ann Wagner (R-Mo.) told Powell that her constituents in Missouri don’t feel like the price spikes are temporary: “

“Housing costs…are skyrocketing. Food costs are higher. Electricity and gas prices are up. Even travel and hospitality costs have seen a great increase,” Wagner said. “I understand that some of these increases are due to supply chain disruptions and labor shortages, but to have prices across the board consistently higher than they were forecasted to be is deeply troubling.”

“I can’t–I can’t really address that,” Powell said. “I can–I can tell you why I think we’re having this inflation that we’re having, though. So, what’s really happening is, first of all, you’re right. The incoming inflation data have been higher than expected and hoped for.

“But they’re actually still consistent with–with what we’ve been talking about — that the very high inflation readings are coming from a small group of goods and services that are directly tied to the reopening of the economy. It’s…new cars, used cars, rental cars, hotel rooms, air–you know, airplane tickets, things that we understand have a connection. But–”

“Well, so, we–we’re monitoring the situation very carefully,” Powell replied. “And we are committed to price stability. And, if we–if we were to see that inflation were remaining high and remaining materially higher above our target for a period of time and that it was threatening to uproot inflation expectations and create a risk of–of a longer period of inflation, then we would absolutely change our policy as appropriate.”

Likewise, Rep. William Timmons (R-S.C.) expressed frustration that at a time of rising inflation, on top of the fiscal stimulus already passed by Congress, lawmakers are “seriously considering spending several trillion dollars more, and most likely it will nowhere near be paid for.”

Timmons asked Powell, “As the chair of the Federal Reserve, where one of your statutory mandates is inflation control, could you provide us an expectation of the type of inflation we should be prepared for if Congress was to spend another $3 trillion in the next few months, and let’s just say that only $1 trillion of that would be paid for with an assortment of tax increases.”

Powell said he wouldn’t be able to answer the question. “I mean, that’s what the Congressional Budget Office will be happy to do is–is make that forecast for you. But that’s not something I can do here on the spot.”

So Timmons answered his own question, telling Powell: “I think the answer to this question is obvious. High levels of inflation we are seeing would only increase and stick around longer. We would certainly not have transitory inflation if we poured that amount of fiscal gas on the fire.

“I also think the labor shortage we are seeing is a big piece of this puzzle, as several of my colleagues have already alluded to. Dozens and dozens of businesses in my district cannot get people to return to work and have critical businesses and their supply chain with the same problem. This is creating scarcity, which results in higher inflation.”

Rep. Madeleine Dean (D-Pa.) asked Powell how she can explain the current inflation situation to her constituents:

“So, you wouldn’t react to something that is likely to go away. So, we–we have to look at this current situation where we have a number of categories of goods and services where inflation’s moving up, as I–as I mentioned, higher than we were expecting and a little bit more persistent than we had expected and hoped.”

Powell noted that many people saved money during pandemic shutdowns, and now they want to spend it: “And, you know, it’s just a perfect storm of high demand and low supply. And it should pass. Unless we think there’s going to be a multi-year, many-years shortage of used cars in the United States, we should look at this as–as temporary.

“And we–we very much think that it is. And so do all the forecasters I’ve seen, think that these price increases for used cars and new cars will–they’ll–they’ll top out. And then, in all likelihood at some point in the future, and we can’t say exactly when, they’ll decline.”

Powell also used the example of lumber prices: “That’s the kind of thing that we’d like to see a lot more of…It’s a situation where there’s a shortage, there’s a lot of demand, supply can’t react, prices go up.

“In the case of lumber, there’s just a lot of buying, almost panic buying. We may be seeing some of that with used cars right now where we have very, very high rates, but that’s the–that’s one of the things we expect is that–is that, you know, our very flexible economy will equilibrate supply and demand. And you’ll see inflation move down, and maybe even have the prices themselves down as we get there.”

Rep. Frank Lucas (R-Okla.) told Powell he’s “nervous” about the 5.4 percent rise in June’s Consumer Price Index: “How much longer can we sustain numbers like this before you become nervous?” he asked Powell:

Powell said if the Fed does see inflation continuing to trend “well above” the Fed’s two-percent goal, “then we’ll use our tools to guide inflation back down to two percent. So, in the end, it’s not going to be–in the end, it will be transitory. And people need to have faith in the central bank that we will–that we will do that.

“But we won’t do it just because, you know, honestly it would be a mistake to do it at a time when we really do believe and, virtually all forecasters do believe, that these things will come down of their own accord as the economy reopens. It would–it would be a mistake to–to act prematurely. So, we really have to weigh the risks of the two things and, at a certain point, the risks may flip. But, right now, the risks to me are clear.