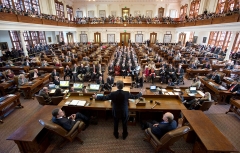 Talarico told “Fox News Primetime” that when former President Donald Trump “lost the election, he told Republicans across the country that he didn’t lose the election, and this caused Republican legislators in state capitols from Georgia to Austin to start putting forward bills that would make it harder to vote, and actually, Texas is one of the hardest places to vote in the whole country.”

HEGSETH: Oh it is?

TALARICO: And so when this started, many of my Democratic colleagues tried to negotiate with our fellow legislators, most of them Republicans, to try to make the bill less damaging, less harmful, less dangerous to constituencies across the state of Texas. Unfortunately, our Republican colleagues didn’t want to negotiate with us.

HEGSETH: Is 17 days of early voting and adding an hour of voting too much? Is it too difficult to provide, I don’t know, your driver’s license number? And the fast — last four digits of your Social security number? Is that too much to ask a voter in Texas?

TALARICO: So, what this bill does, and I’m glad you asked, because it gives me an opportunity to correct something you said earlier which is that this bill actually reduces the amount of time for early voting?

HEGSETH: Oh, it does?

TALARICO: Yeah, so in Texas currently, a county can extend voting to 24 hours. You can actually vote all night, which is really convenient if you work through the day. A lot of working folks aren’t able to get off work to go vote, and now this bill is restricting that and reducing hours across the country.

HEGSETH: It’s voting at 2:00 A.M. in the morning that is the key issue? Is there anyone in Texas that’s not currently able to vote, because I’ve heard the hyperbole – This is Jim Crow. This is voter repression. This is the civil war from the leadership of your party. Is there currently a single example you can provide me of a registered citizen voter in Texas that can’t vote if we’re fighting the civil war here?

TALARICO: Thankfully, this bill has not yet passed yet, and God willing, it won’t pass.

HEGSETH: If the bill passes will there be any minority or woman that’s not able to vote.

TALARICO: So the person who oversees elections is appointed by a Republican in the state of Texas. It’s a Republican appointed secretary of state. She actually said that Texas’ elections in the past two cycles were safe, smooth, and secure. Those were the three words she used to describe it.

HEGSETH: Okay, but we also had as you pointed out your party has pointed out time and time again, we needed to expand these things because of COVID, and by the way, I didn’t see a whole lot of COVID going on on that private plane without those masks, but I digress. So, if COVID’s not there, or ultimately minimized in our application, shouldn’t we be making sure that the rules go back to something that makes sense, that’s reasonable?

TALARICO: That’s a great question. I think, you know, in the pandemic we learned that a lot of things can be made more convenient and more accessible. A lot of folks are working from home instead of going into the office, and that’s exactly what we learned in voting. We can change some of our voting systems to be more accessible to more people–

TALARICO: So voter I.D. Is currently required in the state of Texas. I opposed having to have a driver’s license to vote.

HEGSETH: How about for mail-in ballots. How about having to send your ballot in? Should you have to prove who you are, because that’s what Democrats are opposing?

TALARICO: I just said I oppose voter I.D. Currently, it’s the law in Texas, but I oppose that law, because you don’t need it.

HEGSETH: You oppose voter I.D.? You don’t think the most sacred obligation of our republic you should have to prove who are in order to vote?

TALARICO: So there are a lot of Texans, actually hundreds of thousands who don’t have a driver’s license license, who don’t drive at all.

TALARICO: So Pete, if you are talking about the bill we’re currently focused on, not past Texas law, what this bill is going to do is not only reduce voting hours, it’s also going to empower these partisan poll watchers who are going to look over voter’s shoulders and prevent them from exercising their God-given rights.

TALARICO: Do you remember a second ago when we talked about the big lie? This is exactly what I’m talking about, and the reason so many folks believe in this country is because folks like you get on television every night and repeat the lie over and over again.

TALARICO: You have made a lot of money personally, and you’ve enriched a lot of corporations with advertising by getting on here and spewing lies and conspiracy theories to folks who trust you, and so what I’m asking you to do is to tell your voters right now that Donald Trump lost the election in 2020.

HEGSETH: I’m asking questions. I don’t feel any obligation to answer any question for you.

TALARICO: Pete, the reason I bring this up because this lie.

HEGSETH: My question is why are you in Washington, D.C.  and not in Texas when your job is in Texas because you know it’s inevitable that this bill is going to pass. Eventually you’re going to have to pay your hotel bill and go back to Texas and Governor Abbott will declare a special session.

So you are being used by national Democrats to try to pass hr-1 to federalize elections which you as a Harvard grad should know better, because the Constitution puts that in the hands of state legislators who are supposed to be in their state and you happen to be in Washington, D.C. I don’t know how you square that circle.

TALARICO: I can answer. So Based on the oath that I took for this office. I uphold the Constitution. I uphold the democratic system. And I as a Texas Democrat I will tell you, this. We lose a lot on the floor of the Texas House. We lose votes on abortion and guns and immigration.

HEGSETH: Are you going to flee the state on those? Why is this number one.

TALARICO: This is how democracy is supposed to work. The reason this is different is they are trying to rig the rules of the game.

HEGSETH: Rig the rules of the game. I see. Asking people to prove who they are.

HEGSETH: Your party has been obsessed with covid standards yet the CDC and the White House says you need to wear one on a plane. Why didn’t you guys?

TALARICO: So All of us are fully vaccinated that got on the plane without a mask.