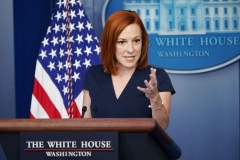 White House Presss Secretary Jen Psaki speaks during the daily briefing in the Brady Briefing Room of the White House in Washington, DC on June 8, 2021. (Photo by MANDEL NGAN/AFP via Getty Images)

(CNSNews.com) – DHS Secretary Alejandro Mayorkas announced Tuesday that Haitian and Cuban immigrants who travel by boat in an attempt to make it to the U.S. will be intercepted by the Coast Guard and not allowed to enter.

“Allow me to be clear: if you take to the sea, you will not come to the United States,” Mayorkas said Tuesday.

“If individuals make, establish a well-founded fear of persecution or torture, they are referred to third countries for resettlement,” Mayorkas said. “They will not enter the United States.”

PSAKI: First, I think it’s important to understand the context of what the secretary was conveying yesterday, which is just that it is still the case that it is not, the way to come to the United States is not through processes of trying to come to the border without going through an asylum process or coming by sea without going through an asylum application process.

There are certainly programs through which some of them have been– have not been reinstated, I should say, that were in place, put in place by the Trump administration that are being reviewed, as he said yesterday. That would apply to the individuals in– people of Haiti and the people of Cuba as well. Those have not been reinstated. They’re being reviewed.

That’s what the secretary said yesterday. What he was reiterating is that this is not the time to travel irregularly. It’s dangerous. People can lose their lives as they have in the past.

PSAKI: I’m not sure what your question is. Why are people leaving Cuba or what is the process for them getting here? I can explain either of them?

DOOCY: Do you think that people are leaving Cuba because they don’t like Communism?

PSAKI: I think we’ve been pretty clear that we think people are leaving Cuba – or not leaving Cuba or protesting in the streets as well, because they are opposed to the oppression, to the mismanagement of the government in the country, and we certainly support their right to protest. We support their efforts to speak out against their treatment in Cuba.

I will say separately an important question is also what happens when people are seeking protection or what happens when they are attempting to flee. In the past, as I noted, we’ve had several humanitarian programs such as family reunification parole programs for both Haiti and Cuba. Those were policies or processes that were in place prior to the Trump administration.

Those have not been turned back on as Secretary Mayorkas said yesterday. He also said we’re assessing the status of those parole programs. Haitian and Cuban nationals in the United States with a fear of return to their home countries may be eligible for protection such as asylum under U.S. law.

Haitian nationals already in the United States may be eligible for temporary protected status, but migrants interdicted in the Caribbean who manifest a fear are referred to USCIS for a protection screening. That’s what happens. Those who do not manifest a fear or who are found not to have a credible fear following a screening are repatriated to their country of origin. Those found to have a well-founded fear of persecution or torture are not brought to the United States. They are referred to a third country for resettlement.

I’m sharing all of that with you so people understand what the process is when they’re trying to make what a treacherous journey is and a challenging journey where people can lose their lives, but certainly we have said many times, and I will reiterate here that we support not just the role of protests and peaceful protests. We stand with the Cuban people in their call for freedom from both the pandemic and from decades of oppression and economic suffering to which they have been subjected by Cuba’s authoritarian regime.