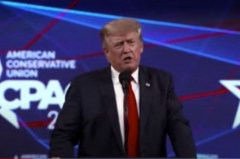 The radical left “are hard at work to abolish the First Amendment…probably, all amendments when you get right down to it,” Trump said.

“They want to take everybody down” who disagrees with them, Trump said, blasting the “arrogance” of Big Tech’s effort to censor CPAC videos and content from their social media platforms. “Honestly, they’re going too far,” Trump said.

CPAC is hosted by the American Conservative Union (ACU), which reports that, on last Friday, YouTube pulled a video of Trump discussing the lawsuit and banned ACU from posting video of its CPAC conference for one week:

The American Conservative Union (ACU) has learned that a recent episode of its “America UnCanceled” program on the CPAC NOW network has been removed by YouTube. The episode featured coverage of former President Donald Trump’s major class-action lawsuit against Big Tech, led by America First Policy Institute. ACU is a plaintiff to the lawsuit.

“It is clear that YouTube censored CPAC because we stood with former President Donald Trump on his lawsuit against Big Tech,” said ACU Chairman Matt Schlapp. “This is yet another example of Big Tech censoring content with which they disagree in order to promote the political positions they favor.”

YouTube issued a strike against ACU’s YouTube account on July 9th and banned the organization from posting for one week. As a result, YouTube has prevented ACU from sharing content from CPAC 2021 Part 2 in Dallas, Texas, including former President Donald Trump’s speech on Sunday, July 11.

Trump told CPAC that Big Tech is acting “like a spoiled child,” so he’s going to court to protect every Americans right to free speech:

“We are taking Mark Zucker-bucks, Jack Dorsey, and the other Silicon Valley billionaires to federal court. And, we will keep on fighting until we have stopped this assault on our liberties and we have restored the sacred right to freedom of speech to every single American.”