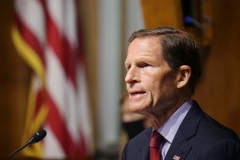 Sen. Richard Blumenthal (D-CT) asks questions during a hearing of the Senate Judiciary Subcommittee on Privacy, Technology, and the Law, at the U.S. Capitol. (Photo credit: TASOS KATOPODIS/POOL/AFP via Getty Images)

What’s in a name? Abortion activists in the Senate want to strip communities and doctors of their ability to protect pre-born children and expectant mothers from the dangers of the abortion industry. This pernicious effort to limit the spectrum of options, resources, and critical information for expectant mothers is called the Women’s Health Protection Act.

This bill isn’t new. Since 2013, sponsors of the radical bill have been attempting to “Keep politicians out of our personal health care decisions” and replace local protections with unlimited abortion that reduces health outcomes but increases profit margins for abortionists.

The Senate Judiciary Committee held a hearing last week featuring an abortion lobbyist from Physicians for Reproductive Health speaking on behalf of the bill, as well as a pro-life advocate from Americans United for Life standing up for women and children. One thing is clear: these witnesses have very different definitions of women, health, and protection. Womanhood is being devalued to create a culture of dependency on abortion. The American people are being coerced into supporting applications of “health” and “protection” that are skewed based on private interests. Three core problems of misogyny, vagueness, and lack of oversight define the Women’s Health Protection Act.

Sen. Richard Blumenthal (D-CT), sponsor of the Women’s Health Protection Act, described abortion as “essential reproductive health care services that women need.” The pro-abortion movement trains society to believe abortion is a woman’s only path to success. Instead of assisting and uplifting mothers, sponsors of WHPA erase mothers, referring to them instead as “people who become pregnant.” Motherhood is being steadily, sneakily reduced to an inconvenient, threatening medical condition instead of a highly personal relationship between mother and child.

In the United States, there are over 2,500 Crisis Pregnancy Centers. These clinics affirm a woman’s motherhood and offer free services that integrate mothers into communities of care. WHPA would criminalize these clinics that care for women and children holistically, describing them as “paternalistic.” This effort to eliminate proper healthcare is pernicious and destructive. Eliminating our responsibility to present an honest spectrum of choice assumes a woman only wants one option, abortion, even when she would consider life if given alternatives and support throughout pregnancy.

Resources for families such as informed consent and ultrasounds are inconvenient to the abortion industry, which is concerned only with its profit and not with its supposed “patients’” health. The consequences could put even more blood on abortionists’ hands. Imagine if a doctor did not give you details about the risks of a surgery unless you knew all the right questions to ask. WHPA would allow girls and women to receive abortion pills without a relationship with a professional. Abortion is the only kind of “healthcare” in which predatory profit supersedes quality care.

Americans United for Life president Catherine Glenn Foster testified with her own personal abortion experience that, “Informed consent helps women make informed choices,” but abortion providers don’t want to leave the back door open. Ignoring life-affirming alternatives for children and potentially life-threatening altercations for mothers leads to more revenue. Foster continued, “Healthcare is a heavily regulated industry because patient protections matter, and although abortion is not healthcare, this bill would treat it like healthcare, except without the same oversight or patient protections.”

Problem #3: Protection out the window

According to the Guttmacher Institute, 43 states limit abortion after a certain stage of pregnancy in order to protect pain-capable unborn children and mothers who face high risks late in their term. Late-term abortions also make it possible to choose life or death based on factors such as gender or Down Syndrome. WHPA defies any protections from abortion on-demand, making unacceptable trade-offs between convenience and protecting people from physical harm and outright discrimination. Women, people of color, and people with disabilities are the silent victims facing cruel injustice through discriminatory abortion. In every industry, the law is meant to protect. States must have the liberty to protect and defend as a sanctioned legal authority.

It’s true that Democrat senators made this bill sound just, equitable, and necessary. Many times, their campaign funding depends on it. Blumenthal repeatedly claimed in the hearing that America’s health care system is “under siege” because of “cruel, deceptive, and inflammatory” regulations. He defined states’ growing involvement in protecting unborn citizens as a reproductive rights “crisis.”

When it comes to WHPA, you can’t take a name at face value. We must read between the lines and stand up against threatening redefinitions of women, health, and protection. A child is not a problematic medical condition. Mothers are capable and deserving of the whole truth, health provisions must be clear and thorough because lives are on the line, and protections are for every American— including those who could be thrown away as unwanted, inconvenient, or disabled. The “Women’s Health Protection Act” is a deceiving misnomer and its extreme reforms normalize standards that are strikingly dangerous for Americans.