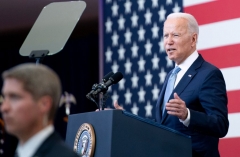 (CNSNews.com) – President Joe Biden on Tuesday accused Republicans of wanting to make it hard and inconvenient for people to vote, adding that the United States is “facing the most significant test of our democracy since the Civil War.”

The president used his speech in Philadelphia to call on Congress to pass H.R. 1, the “For the People Act” and the “John Lewis Voting Rights Advancement Act.”

“Legislation is one tool, but not the only tool, and it’s not the only measure of our obligation to defend democracy today. For example, Attorney General Merrick Garland announced that United States Department of Justice is going to be using its authorities to challenge the onslaught of state laws undermining voting rights in old and new ways. The focus will be on dismantling racially discriminatory laws like the recent challenge to Georgia’s vicious anti-voting law,” Biden said.

“The Department of Justice will do so with a voting rights division at my request is doubling its size in enforcement staff. Civil rights groups and other organizations have announced their plans to stay vigilant and challenge these odious laws in the courts,” the president said.

“In Texas, for example, Republican-led state legislature wants to allow partisan poll watchers to intimidate voters and impartial poll workers. They want voters to dive further and be able to be in a position where they wonder who’s watching them and intimidating them, to wait longer to vote, to drive a hell of a lot – excuse me, a long way to get to vote,” he said.

“They want to make it so hard and inconvenient that they hope people don’t vote at all. That’s what this is about. This year alone, 17 states have enacted – not just proposed – but enacted 28 new laws to make it harder for Americans to vote, not to mention, and get this nearly 400 additional bills Republican members of the state legislatures are trying to pass,” Biden said.

“It’s unrelenting, and we’re going to challenge it vigorously. While this broad assault against voting rights is not unprecedented, it’s taking on a new literally pernicious forms. It’s no longer just about who gets to vote or making it easier for eligible voters to vote. It’s about who gets to count the vote, who gets to count whether or not your vote counted at all,” he said.

“It’s about moving from independent election administrators who work for the people to polarized state legislatures and partisan actors who work for political parties. To me, this is simple. This is election subversion. It’s the most dangerous threat to voting and the integrity of free and fair elections in our history,” Biden said.

“Never before have they decided who gets to count, count, what votes count. Some state legislators want to make it harder for you to vote, and if you vote, they want to be able to tell you your vote doesn’t count for any reason they make up,” the president said.

“They want the ability to reject the final count and ignore the will of the people if their preferred candidate loses, and they’re trying not only targeting people of color, they’re targeting voters of all races and backgrounds with a simple target – who did not vote for them. That’s the target,” he said. “It’s unconscionable.”

“We must ask those who represent us at the federal, state, local levels, will you deny the will of the people? Will you ignore their voices? We have to ask, are you on the side of truth or lies, fact or fiction, justice or injustice, democracy or autocracy? That’s what it’s coming down to,” Biden added.