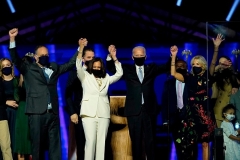 The Bidens and the Harrises celebrate their election victory in Wilmington, Delaware on Nov. 7, 2020. (Photo by ANDREW HARNIK/POOL/AFP via Getty Images)

(CNSNews.com) – “Today I am pleased to announce that the Democrats are making a $25 million investment to expand the “I Will Vote” campaign,” Vice President Kamala Harris told a gathering at Howard University in Washington, D.C., on Thursday.

She said the campaign funded by the Democrat National Committee is grounded in the belief that everyone’s vote counts.

“And we saw this in 2020. More Americans turned out to vote than ever before in the middle of a pandemic. America, you masked up; you mailed in your ballots; you did not let anything stop you from making your voice heard.”

Democrats, pleased with the record turnout that gave them control of all three branches of government in 2020, are determined to retain relaxed, pandemic-induced election rules that may make it easier to vote, but also make it easier to cheat.

Harris on Thursday used her speech to spread the Democrat talking points that Republican states are now trying to suppress the vote by passing laws that are intended to enhance election security by correcting some of the flaws that surfaced in 2020, particularly regarding universal vote-by-mail.

This all is designed, I believe, to make it harder for you to vote — so that you don’t vote.

And let’s talk about what exactly these laws will do: What will they actually do?

Well, let’s say in the last election you may have voted early ’cause you work long hours. Well, these laws will cut early voting.

Let’s say your cousin voted by mail to avoid the long lines. Well, these laws will cut vote-by-mail.

Say your co-worker — say the friend next to you, the “friend” — voted in person on Election Day and put on that sticker with pride. Well, these laws will make it difficult for folks who wait in line.

These laws create obstacle upon obstacle. These laws make it harder for you to vote, because they don’t want you to vote.

(Harris, in her voter suppression argument, did not mention voter ID requirements, of which a majority of Americans approve, according to polls. And the various laws she mentioned do not eliminate early voting; in some cases, early voting is expanded. Nor do the laws eliminate vote-by-mail or absentee voting, but they may tighten the procedure for mailed ballots and/or ballot drop boxes. As for the difficulties of waiting in line, the Georgia law says self-serve water and snacks may be furnished for voters, but poll workers and activists may not offer anything that may be construed as buying votes.)

Harris assured her audience that their vote matters, regardless of “who you are, where you live, what party you belong to.”

“And so I say, don’t let anybody ever take your power from you.”

Harris plugged voting “rights” legislation now pending in Congress. And she mentioned “another important component… and that is, mobilizing to ensure Americans vote in the elections coming up ahead.”

Harris said it may seem like it’s too early to talk about the midterm elections. “But folks, it is never too early to defend your rights. So with these new laws that have been passed, or they’re trying to pass, we have to start now, to finish strong,” she said.

“People say, what’s the strategy? Well, I just outlined it,” Harris cackled. “We are going to assemble the largest voter protection team we have ever had to ensure — to ensure that all Americans can vote and have your vote counted in a fair and transparent process.”

She said it’s not about Democrats or Republicans, but “all Americans.”

According to the DNC, in addition to voter registration efforts, Democrats will:

— continue to use litigation as a tool to protect voters and to support our democracy.

— commit millions to television and digital advertising, especially digital communications, to better educate voters on how to participate — how to register and where and when to vote.

— use data and technology to identify and contact voters affected by suppression efforts and voter roll purges, to ensure that all eligible voters have the information they need to cast a ballot.