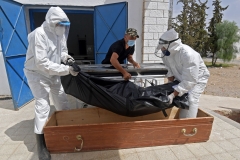 (CNS News) — In remarks about the origins of COVID, House Minority Whip Steve Scalise (R-La.) said “the weight of evidence strongly points to the virus having emerged from the Wuhan Lab” in Communist China.

“Four million people around the globe have died from COVID 19 – 600,000 of those deaths here in America,” Scalise said at a GOP COVID origins hearing on June 29. “So, we have a simple, basic question: How did this evil pandemic start? What was the origin of COVID-19?”

“We have asked that question for more than a year and requested that the House majority hold hearings to investigate the origins of COVID,” said Scalise. “Perplexingly, Speaker Pelosi has refused to allow a single hearing – calling it a ‘diversion.’ As the American people will hear today from our expert witnesses, this is far from a diversion.”

“The evidence continues to mount that this was a man-made disaster that started in the Wuhan lab,” said Scalise.  “If that is the case, then it might be the crime of the century – exponentially worse than Chernobyl.”

No Democrats attended the meeting despite being invited by the Republicans. “We invited the Democrats to join us. Speaker Pelosi said it was a diversion,” commented Rep. Michael McCaul at the forum.

In his opening remarks, House Minority Whip Scalise said, “Today’s witnesses will lay out two specific facts: One, the Chinese government engaged in a series of lies followed by a massive cover up from the very start of COVID.  And number two, the weight of evidence strongly points to the virus having emerged from the Wuhan lab.”

“First, there is simply no substantive evidence supporting the theory that SARS COVID-2 was a virus transferred from an animal to a human, and recent scientific scholarship suggests that such a zoonotic transfer is unlikely. Chinese researches have failed to find the original bat population or species from which the virus may have jumped, despite an intensive search and testing more than 80,000 animals.”

“Second, there were multiple warnings about safety at the Wuhan lab, beginning as far back as 2017. Health and Science experts from U.S. Embassy in Bashing warned the lab’s work to make bat corona viruses infectious for humans, coupled with the grave safety concerns, could result in the accidental unleashing in a SARS like Pandemic.”

This aerial view shows the P4 laboratory (L) on the campus of the Wuhan Institute of Virology in Wuhan in China’s central Hubei province on May 27, 2020. – Opened in 2018, the P4 lab conducts research on the world’s most dangerous diseases and has been accused by some top US officials of being the source of the COVID-19 coronavirus pandemic. (Getty Images)

“Fourth, the People’s Liberation Army reportedly conducts secret scientific research in the Wuhan lab and the head of the lab is a major general in the People’s Liberation Army who is recognized as China’s top bio-warfare expert. Given the Chinese military presence at the lab, it is difficult to understand why the U.S. Government permitted and funded collaborative research there. And finally, China has prevented a fulsome and creditable investigation into the origins of COVID-19. Why would they do such a thing if the Virus originated from an animal?”

Rep. McCaul, the ranking member of the House Foreign Affairs Committee and chairman of the China Task Force, said, “After continuing to research this topic, I now feel comfortable concluding that it is more likely than not, that it came from the lab. In fact, I would say that there is credible evidence, as a formal federal prosecutor.”

McCaul added that the Communist Chinese tried to cover-up the outbreak by reportedly detaining and silencing doctors; destroying samples; and refusing to cooperate in a real investigation. He also said the World Health Organization failed to warn the world of the pandemic in a timely and effective manner.

“This was the worst cover-up in human history,” said McCaul. “[E]ven the CCP now has admitted, after the fact, that they don’t believe that the virus originated at the wet market.”

Although the Republicans at the forum believe there is enough evidence to conclude that COVID originated in the Wuhan laboratory, there is no evidence that conclusively proves that is what happened.

On June 11, 2021, the Congressional Research Service issued a report, “Origins of the COVID-19 Pandemic.”

The report summarizes a WHO analysis of the COVID origin, based on a WHO team sent to China. “From January 14 through February 10, 2021, a team of 34 experts—17 from China and 17 from other countries and organizations—traveled to Wuhan to collect and analyze existing and additional data,” reported the CRS. The WHO report “presented four hypotheses on the origin of SARS-CoV-2 and assessed their likelihood of being the cause.”

The WHO did not determine the origin of COVID.  It did, however, present four possible hypotheses for its origin and them from “very likely” to “extremely unlikely.”

The WHO report did not consider a hypothesis that the virus was released intentionally, stating that it had been ruled out by other scientists.

As reported by the CRS, “Ultimately, the investigators did not identify the source of SARS-CoV-2 and recommended further studies.”

Neither the Democrats nor President Joe Biden have expressed an interest in investigating and confirming the origins of COVID, a disease that, to date, has killed 606,000 Americans.