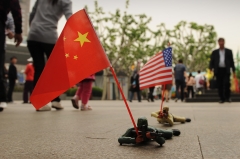 Toy soldiers, one with a Chinese flag and one with a U.S. flag are seen for sale on a street in Shanghai on May 3, 2012. (Photo credit: PETER PARKS/AFP/Getty Images)

Imagine a massive nuclear exchange between the United States and China. That obviously would not be a pretty sight for the people of either nation. As the mushroom clouds arose over both nations, imagine thinking to yourself: “All this because of a socialist road.”

According to an article in the London Daily Mail, the governments of China and Montenegro entered into an agreement in which China agreed to build a road for Montenegro that would extend to the Serbian capital of Belgrade. The road is only partially built and is now being called the “road to nowhere.”

China financed the road with a $1 billion loan to Montenegro. The first installment on the loan is due this month. But there is a good chance that Montenegro, “whose debt has soared to more than double its GDP,” will have to default.

The loan agreement entitles China to seize land within Montenegro, so long as it isn’t owned by the military or used for diplomatic purposes.

What does all this have to do with a nuclear war between the United States and China?

If Montenegro defaults and, for whatever reason, refuses to permit China to seize its collateral, China might well invade the country to enforce its loan agreement.

What does that have to do with the United States?

In 2017, Montenegro became a member of NATO. Under NATO’s membership rules, NATO members, including the United States, are bound to come to the defense of other NATO members in the event that a non-NATO nation attacks them.

I can’t help but wonder how many Americans realize that they have had their lives and fortunes pledged to the defense of Montenegro. For that matter, the same holds true with respect to all the other members of NATO, which are as follows: Albania, Belgium, Bulgaria, Canada, Croatia, Czech Republic, Denmark, Estonia, France, Germany, Greece, Hungary, Iceland, Italy, Latvia, Lithuania, Luxembourg, Netherlands, North Macedonia, Norway, Poland, Portugal, Romania, Slovakia, Slovenia, Spain, Turkey, and United Kingdom.

What’s amazing is how this process works. No one came to Congress and asked whether the American people were willing to sign a treaty with Montenegro that committed American lives and fortunes to the defense of Montenegro in some future war. My hunch is that if that had happened, enough Americans would have risen up to successfully oppose such a treaty.

Why do the American people continue to go along with this junk? Do they have such low regard for their own lives and fortunes that they are willing to subject themselves, their families, and their money to the whims of faraway foreign bureaucrats? Or do they just feel too helpless to stand up and say no? Or is their passivity just part of the overall deference-to-authority mindset that is inculcated into Americans in public (i.e. government) schools?

Let’s assume that there were no NATO and that China then attacked Montenegro to enforce its road loan agreement. How many Americans would travel to Montenegro to give their lives in the defense of Montenegro?

Answer: None! Not one single American, including the most ardent interventionists and anti-communists and including every member of the Pentagon, the CIA, and the NSA, would go to Montenegro to defend the country,

Why should the United States be part of an organization in which foreign bureaucrats are deciding when and under what conditions the American people are going to war? Why shouldn’t Americans be free to decide which wars to enter on an individual war-by-war basis?

Our nation’s Founding Fathers, including George Washington and Thomas Jefferson, warned against these types of “entangling alliances.” Today’s Americans would be wise to heed their words and withdraw the United States from NATO, that old Cold War dinosaur, before it’s too late.

Jacob G. Hornberger is The Future of Freedom Foundation’s president and founder. He has served as a trial attorney in Texas, a law and economics professor at the University of Dallas, and the Foundation for Economic Education’s director of programs.

Editor’s Note: This piece originally appeared on The Future of Freedom Foundation.