Abortion activists desecrated a statue of Jesus in Arkansas early Friday morning by hanging a banner with the words “God Bless Abortions” written in red across it.

KNWA FOX 24 reports the pro-abortion group Indecline, which also bragged about vandalizing a billboard in Mississippi earlier this year, took credit for the act.

The Christ of the Ozarks is a 67-foot statue of Jesus that stands on top of Magnetic Mountain in Eureka Springs, according to the report. The Great Passion Play oversees the care of the monument.

Disguised as construction workers, the abortion activists said they scaled the statue early Friday morning to hang the banner. They said they want to make a statement about “the dramatic attempts being made in Arkansas and throughout the South to ban abortion services to women in need.”

The abortion activists appear to be part of an antifa, or anti-fascist, group that works anonymously to vandalize property and create shock art to make political statements about abortion and other issues. The group describes itself as an activist art collective.

SUPPORT LIFENEWS! If you like this pro-life article, please help LifeNews.com with a donation!

On its website, it sells a T-shirt for babies that reads, “God bless abortions.” Another T-shirt reads “Shoot cops” next to the image of a camera.

In March, the group also took credit for vandalizing a Byhalia, Mississippi billboard purchased by Christian Aid Ministries. The message read, “Worried? Jesus offers security,” along with a phone number for the ministry. The pro-abortion group spray-painted over the billboard, changing the message to say, “Worried? Planned Parenthood offers abortions.”

Often, Christians and pro-life advocates are targets of harassment, threats and violence just because of their beliefs.

LifeNews.com recorded nearly 200 incidents in the past three years, including a bomb threat during a 40 Days for Life event in Minnesota, the brutal attack of an older pro-life man outside an abortion facility in San Francisco, a pro-life banner set on fire inside a Western Washington University building, and a man charged with pulling a gun on pro-lifers outside a Delaware abortion facility.

Reports this year include:

Maine – Driver Crashes Her Car into Pro-Lifer’s Van After Yelling at Pro-Life Protesters, Flipping Them Off

Mexico – Violent Feminists in Mexico Terrorize Legislators, Threaten Them if They Don’t Vote to Legalize Abortions 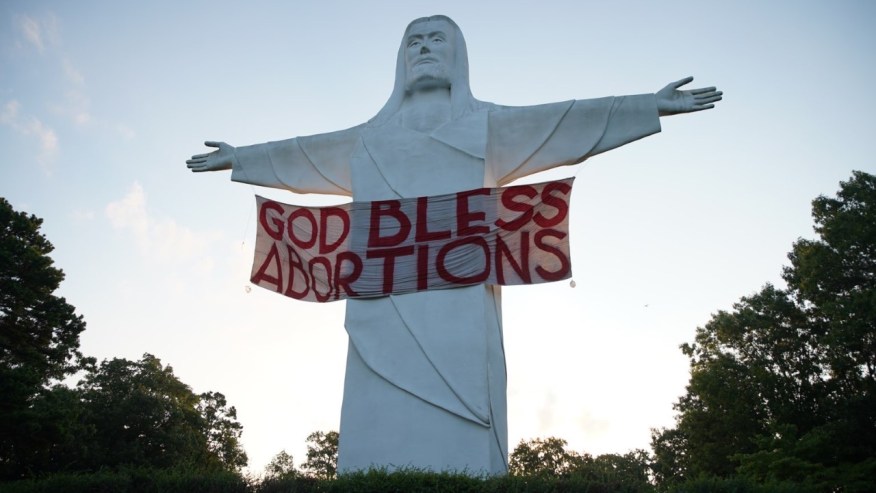