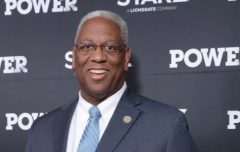 (CNS News) — When asked whether a person should be required to show an ID in order to vote, as is usually required to purchase alcohol, Rep. Donald McEachin (D-Va.) said, “It should be a federal government decision.”

At the U.S. Capitol on June 29, CNS News asked the representative, “Should someone be required to show an ID in order to buy alcohol?”

Rep. McEachin said, “I think if you’re underage, yeah. To make sure that you’re the proper age, yes ma’am.”

In a follow-up question, CNS News asked, “And what about to vote?”

“Voting is a civil right. I don’t think so, no. But I’m happy to live with the compromises that are being proposed,” said Rep. McEachin.

“Do you believe that should be left up to the state or federal government to decide whether people should be required to show an ID?”

Through their sweeping electoral change legislation, the For the People Act, which was filibustered in the Senate last week, Democrats sought to expand federal power over elections and undercut state voter ID laws. Although the legislation is going nowhere now, Democrats are pushing alternative bills.

The Republican National Committee has denounced the Democrats’ efforts, saying, “Democrats are currently attempting a partisan power grab with their radical H.R. 1/S. 1 “For The Politicians” Act.” This bill, filibustered for the time-being, “is a federal takeover of state elections that would eviscerate commonsense state voter ID laws currently in place in many states, force states to allow ballot harvesting, and make taxpayers fund the campaigns of career politicians.”