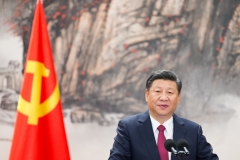 The Chinese publication on July 5 tweeted, “How a gun-happy nation spends its #FourthofJuly weekend,” along with a propaganda cartoon depicting men in suits toasting their cocktails “to freedom,” while a man waves firearms in the air next to bullet casings, blood spatter, and a grave labeled “death from firearm.”

China Xinhua News is also referred to as Xinhua News Agency or New China News Agency and is the largest state-owned newspaper in China, according to The Daily Caller. Twitter labels the outlet as “China State-Affiliated,” to inform Twitter users that it is run by the government of China.

They began the anti-America tirade on the 4th of July, sharing a tweet that read, “How many deaths must the world suffer before a baby learns to share? Stop #VaccineNationalism,” next to a graphic of a man dressed as a baby and donning an American flag hat. The man also appears to be hoarding a pile of syringes labeled “Covid-19 vaccine” while saying “All mine!”

The Wall Street Journal recently reported that a study by a U.S. lab concluded it was “plausible” that the Covid-19 virus could have originated in a lab, and that this theory warrants further investigation.

Some members of Congress have stated it is possible the virus originated in the Wuhan Institute of Virology.

The exact origins of the virus, however, have yet to be determined.

The US has a track-record of accusing other countries of Human Rights, while ignoring what’s going on in their own house pic.twitter.com/zmsRK7D8Ny

China Xinhua News also tweeted, “The US has a track-record of accusing other countries of Human Rights, while ignoring what’s going on in their own house” alongside a cartoon featuring a sweating Uncle Sam saying, “Human rights abuse!” in front of a backdrop of slaves and Native Americans.

Since the Communists took over China in 1949-50, more than 65 million Chinese have been killed for political reasons, including the victims of Maoist-caused famines and the barbaric Cultural Revolution, according to The Black Book of Communism (Harvard University Press).

One of the concentration camps in China. (Getty Images)

For comparison, during the roughly four centuries of the trans-Atlantic slave trade, about 450,000 slaves total were brought to the United States.

According to the United Nations in 2020, “Globally, more than 40 million people are still victims of contemporary slavery, including about 25 million in forced labour and about 15 million in forced marriage…. One in four victims are children, and women and girls account for 71 per cent of the victims.” (Emphasis added.)