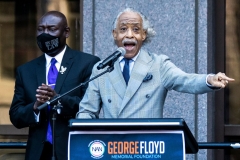 Rev. Al Sharpton, the founder and President of National Action Network, flanked Attorney Ben Crump (L), speaks during a remembrance for George Floyd in Minneapolis, Minnesota, on May 23, 2021. (Photo by KEREM YUCEL/AFP via Getty Images)

(CNSNews.com) – Rev. Al Sharpton, founder and president of the National Action Network, said Tuesday that people should be just as outraged with violent crime in the black community as they are with police shooting black people.

During an appearance on MSNBC’s “Morning Joe,” Sharpton said that the rise in violent crime in “black and brown communities” is “a very, very serious problem.”

“I was in a place called Bibi, Arkansas, yesterday doing the eulogy of a funeral of a young white teenager named Hunter Britton that was killed by police, but the irony is when I got to Little Rock, Joe, to prepare for the sermon yesterday, a black that was working in the restaurant said I hope you go over to what was the black community and talk about these kids shooting each other,” he said.

“Four kids killed each other over the weekend. There is just as much concern about what is going on with gun violence, this kind of violence that you’re talking about: In Chicago, 100 people shot over the weekend,” Sharpton said.

“We must have the balance of outrage, where we are outraged if police do things in blue uniforms but outrage when we have people in blue jeans that are openly being criminal, acting like it’s normal in our community. It is not normal. It should not be accepted,” he said.

“People should understand the underlying issues, but they shouldn’t patronize us, that we do not know how to deal and challenge with criminal behavior. Civil rights leaders, some of us are meeting with President Biden this week,” Sharpton said.

“We not only want to talk about voting rights and police reform but how we have to factor in in dealing with gun violence in this country. You can’t love our people when they’re shot by police, and then look the other way when we’re shooting each other. We have to deal with both,” he added.